This article appeared in the June 2004 edition of Connections (which is now called Bloom) – a publication of Bloorview Kids Rehab. I’m ‘reprinting’ it here with the aim of starting a collection of essays, speeches and thoughts – some previously recorded, some still to come. 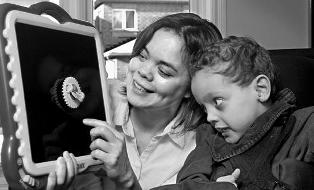 My five-year-old son is the wisest person I know. He is able to live in the present, without regret for the past or fear of the future. When he’s happy, he’s happy, and when he’s sad, he’s sad. His emotions are pure and uncomplicated. It’s a blessing of childhood to be able to live so freely, and many other children share this awesome gift. But my son, Owen, lives in a very different world than most other kids – he lives in a body that makes his gift so much more visible and challenging.

Owen has cerebral palsy and is unable to perform tasks we all take for granted, such as holding up his head, grasping with his fingers or even looking in the direction he wants. He relies on others to tend to all aspects of his daily living needs. As he is also deaf and non-verbal, he’s not able to give people instructions on how to care for him. His vulnerability, and his trust in others, is absolute.

I have encountered people who look upon Owen (and sometimes the rest of our family) with pity. I must admit that I, too, can look at Owen and think that his life is a hard one – a long, difficult journey without achievement or material pleasure. That his life is somehow not “equal” to mine or yours, because he may never get a university degree, or excel at a career, or marry and have children. And that he must be suffering because at some level, perhaps he knows what he’s missing.

At these times, when I make these wild assumptions, I watch him closely so I can prove I’m right. I look for the deep misery I’m so sure is there. And at these times, I’m almost angry when I don’t see it. Of course, he has his moments of anger, fear and sadness. But they are just that – moments. These feelings pass as quickly as the moment itself. When the thing causing pain is gone, his pain stops. He moves on to the next moment. He is nowhere but right now – and the more I witness this amazing ability, the more I realize that the pain I’m imagining he has is actually my own. Part of my own learning in parenting (I also have a three-year-old, Angus) is to understand that my children are continually mirroring back to me my own condition.

If I’m feeling unappreciated, my boys demand more attention. If I have unexpressed sadness, their tears come more easily. I have known of this concept of mirroring for some time now. But my experiences with Owen are accelerating my learning. It was pointed out to me recently that Owen is a particularly clear mirror on which I can project myself – there is less “noise” to interfere with the projections and my reactions come even more quickly.

For most parents, the process of raising children challenges long-held notions – such as the value of material wealth and physical attractiveness, and the illusion of control. Even before having children, I guessed that raising them would change me in some way. But nothing prepared me for the challenge I face in raising Owen: to shed even more of my egotistical assumptions about what makes a life worth living.

I hold intelligence, commitment and good decision-making high on the list of characteristics I want to instill in my children. Having eased my emphasis on some of the more material trappings, I imagine that these qualities are more noble, more honest, more worthy aspirations for a “good life.” But even these do not escape critical review. If I hold Owen to these standards, where is he on my scale of this “good life?” And more importantly, where am I? How do I prove I’m a good mother if he can’t learn all that I have to teach him?

I’ve come to appreciate that the answers are elusive because I’m asking the wrong questions. And that I’m still attached to achievement of the ego, not to peace of the soul – which can only come from being fully present. If I were to assess Owen’s life on this basis he would get top marks. And if I could embrace this quality in Owen – oh, what a delightful peace that would bring! Instead, sometimes, I react with a rage that is startling. I get angry that Owen does not strive for perfection, or disguise his vulnerability, or pretend he’s “stronger” than he is. He does not struggle to do any of the things I have spent a lifetime doing, and this can trigger a strong reaction like nothing else.

I said I’ve been asking the wrong questions. But are there any right ones? If I desire a life of peace, I would think not. Maybe asking questions, and then scrambling to answer them, is a fool’s errand. Maybe this is just a set-up for failure, as I might never live up to any standard I create. What if I am good enough already, because I am who I am – not because I’m striving to be ever better? I have a hunch that if I choose this path, I might wind up becoming the mother I was working so hard to be in the first place.

Owen is indeed a clear mirror, reflecting back to me my struggle for perfection. I am seeing now that the challenges I have in life are not his – and that his are not mine. If I can keep this straight, I may yet be as wise as my five-year-old son.