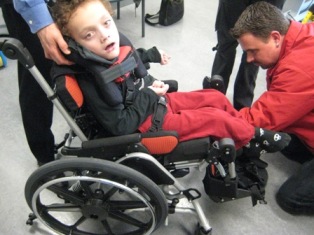 Several days ago, Owen was kitted out with a demo wheelchair – the same one I discussed earlier in this blog. It’s called a Kids Rock dynamic wheelchair, and has a special spring-like action that engages when Owen becomes spastic or reflexive. If he thrusts (straightens at the hips while sitting), the hinge between the seat cushion and back cushion opens slightly – allowing him a bit of movement without causing instability. When he relaxes, the chair returns to its original position.

We’ve taken it home and will be trialling it for another week or so. I’ve had it with me in my place for the past week, and now his dad will try it for a week at his place. We’ll regroup at the end of the trial and decide if we like it. So far, my vote is yes. My only complaint is related to the fact that it has demo parts – the wheels are too big and Owen likes to rest his hands on them. If I don’t notice and start moving him, his hands/forearms rub on the turning wheels… potentially, highly problematic. I will order smaller wheels for the new chair, of course.

I also like that the movement doesn’t seem to interfere with his ability to access his switches. And if it ever does, the movement can be ‘turned off’ by moving a lever located at the back of the chair.

Once the trial is over, I will post another entry with our decision.