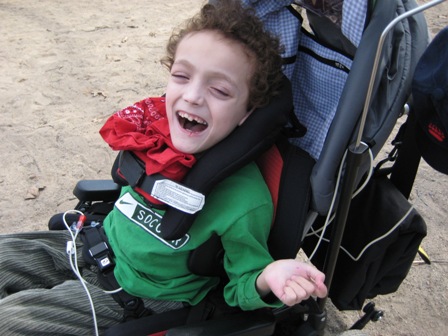 A brief (recent) medical history and update: Owen is not responding to the medication in his intrathecal baclofen pump implant, either due to mechanical problems with the pump/catheter or changes in how his body processes the medication. Over the course of many weeks in the hospital, he experienced what seemed to be alternating symptoms of extreme withdrawal and extreme overdose. We have now come to the conclusion that for whatever reason(s), it is unsafe for Owen to rely on the pump’s performance to control his spasticity; he’s back on large doses of oral medication while we titrate down the dose in the pump. The ultimate plan is to turn the pump off (or down, as low as it can reasonably go), let it sit unused for a while, and then make a decision. Options will be to replace the catheter (a simple procedure in theory) and try again or remove the pump altogether.

The oral medications are deeply sedating – they work simply by turning the brain off (or down) to reduce the frequency and intensity of the misfires that cause the spasticity. Simple proof is seen when Owen is asleep – no muscle tightness. Recently however, his usual deep sleep is interrupted by frequent, powerful reflexive posturing (sudden ‘fight or flight’ movements initiated by the brain stem – primitive responses that most of us outgrow in infancy). He can sometimes sit comfortably in his wheelchair, but only if he is sedate and dopey. If alert, he’s very uncomfortable and looks like all of his energy is consumed with just being spastic. He becomes tremorous, sweaty and distressed.

He is now at his upper limit for his daily dose of the primary drug we are using to manage his spasticity (oral baclofen). So we are about to try another medication typically used in adults (tizanadine), whose use is largely undocumented in children (although not infrequently used). It too is a spasticity medication but theoretically less sedating. He starts a low dose in a week or two.