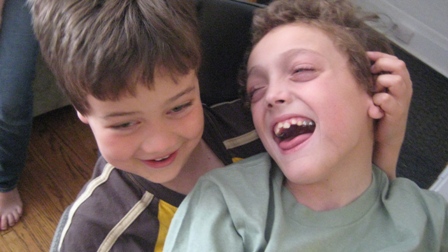 (This photo has nothing to do with the following post.)

Sorry – I posted the MRI results and left everyone hanging.  Turns out the results don’t really indicate anything in particular.  The generalized atrophy simply means that his brain is smaller than is expected at his current age.  And one part of the brain, the basal ganglia, is markedly proportionally smaller.   This isn’t surprising; the basal ganglia controls, among other things, movement.  And Owen clearly can’t control his movements.  So we would expect to see something different or unusual in that part of the brain.

The other thing I learned is that although suggested in the report otherwise, his brain has not deteriorated in any way. The volume loss indicated is apparently quite negligible and for all intents and purposes, his brain is developing the same way it was when he was a year and a half old.  So his brain condition is said to be (likely) static and non-progressive.

I find this all rather anti-climactic.   I was, for maybe the first time ever, looking forward to results that could offer an explanation as to why Owen has changed so much in the past year.  I haven’t cared about the lack of diagnosis but recently my curiosity had gotten the better of me.  And when I finally agreed to testing, after so long, I thought my holding-out would be rewarded with some answers.

So not only was the result mildly disappointing, I feel like we got the ‘booby prize’ – these MRI findings likely mean he’s a good candidate for deep brain stimulation (DBS), which involves implanting electrodes in parts of the brain to help regulate brain activity.  In Owen’s case, DBS might reduce his dystonia and associated pain and tremors.   I’m a little gun-shy about more implants at the moment, in the brain no less, but as I sit with it I realize that it doesn’t hurt to be informed.  So, off I go – meetings, research, questions, Googling.