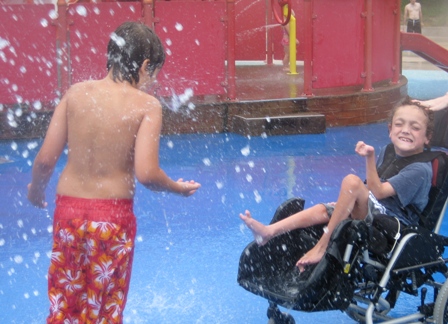 Here’s the truth of the matter:  I don’t know anymore.

But I used to.  What changed?

My guess is that until now, I thought my challenges were kind of hard but not gruelling.  I was being given what I could handle and I was handling it all well.    The supposed uncertainties of Owen’s young life were never actually really all that uncertain.  When Owen was a two-, four-, six-year-old, I knew what his limitations were, what his health status was, what his basic trajectory was going to be:  he simply wasn’t going to change much.  Just get older.  And bigger.  Older and bigger were things I could anticipate and prepare for.  Of course he had medical and health challenges, but they were par for the course.  He spent the first 3 months of his life on a ventilator in intensive care.  Pneumonia?  Surgery?  Child’s play.

Sure, I would often say and do hopeful things that suggested maybe there was potential for more function, independence or communication – but I knew what everyone else knew.  That whatever incremental improvements he might experience, his ongoing care and requirements were as predictable as rain.  There was stress, yes, but no fear.  And I definitely didn’t ever think that Owen wouldn’t survive at least into young adulthood.

I often talk about the gifts Owen has brought to my family and me – he keeps us in the moment, gives us perspective, helps us prioritize – and we’re now all better off.   I still think it’s true, mind you.  But I say it like he arrived one day with a fanfare, handed out his presents and then life returned to normal.  Like he’s an event that happened once, and now that we are used to this way of life, everything is fine.  I have spent many years feeling  especially wise because I’ve lived through something traumatic and emerged out the other side.

All of this melts away in the face of death and dying.  Not that I think Owen’s death is necessarily imminent – but I feel that upcoming decisions resemble those made in palliative situations.  I see no ‘improvements’ forthcoming – I  see only pain management, quality of life, reduction of self-injury, and setting up environments and situations that invite loving people to care for him.

Owen did not happen once.  He continues to happen. And change.  Like with all of life, the security and shelter of childhood is giving way to the reality of impermanence.  I feel that right now, the uncertaintly of Owen’s future is palpable.   I no longer assume that he will be here in a year, a month, even a day from now.   And the principles I have based decisions on in the past are irrelevant or just don’t make sense any more.

Maybe everything until now has been practice.  Here’s where the rubber hits the road, as they say, and if I can remain in the moment, keep perspective, prioritize – then I will certainly have evolved.  Passed the test.

Why is it I feel so unprepared?

Let me say more about what I don’t know. I don’t know how I, entrusted with this precious life that refuses to be anything resembling typical, am supposed to figure out what to do next.   There is no path that others have succesfully cleared that I can follow and know that I will arrive at the end and have no regrets.  And the sad irony is that, as I sit here furiously wondering what to do next…  there just aren’t any good options.