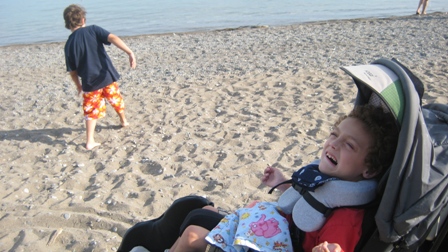 (Another random photo of the boys – eastern Beaches in Toronto.)

As I mentioned in my last post, I’ve received a few messages from readers sharing their stories about their own children (presumably all with disabilities) who have died – some recently, some long ago.  I was moved and honoured to receive these stories, and I have to admit also appalled.

I did the TV shows to send a message of acceptance and peace.  To showcase a family moving forward in the face of so much uncertainty.  I was an EXAMPLE!

I was so not expecting the responses I received and they gave me such an emotional jolt that I can’t help but wonder if this not-so-gentle reminder of Owen’s humanity isn’t some kind of preparation.  And so well, of course it is – every conversation or thought about death will better prepare me for Owen’s eventual death – but I mean is it perhaps an intentional preparation?  A divine intervention to get me in the right frame of mind?

I’ll explain.  This thought is not out of nowhere.

Here’s how I have started to reconcile things:  Owen’s having the moments and experiences I was so praying he could hang on long enough to have as he was lying in his hospital bed last spring, alternately fighting for and fleeing from life.  Whether I had any say in the matter is debatable, but I knew that I was not ready to let him go after such a long winter indoors.  I thought please please please let him live a bit longer so I (and others) can get him out in the fresh air, put his toes in the grass and float with him down the Lazy River at Great Wolf Lodge.  (Ok, that last one wasn’t so clearly visualized at the time.)  And I was very aware that I was making this wish because I knew that if he died then I would have to live with the unbearable anguish of feeling I had not done enough to give him a quality life.

So it was during that hospitalization I promised to Owen that he would never again be sent to school to endure the monotony of an institution that has no idea what to do with him.  I also promised that I would surround him with as much love and joy as possible.   And I committed to removing the pump he seemed to be rebelling against.

And now, all of this has been accomplished.  And Owen is happy! And more physically compromised than ever.

So back to the letters.  I wept for each of those mothers who wrote to me not because I felt sorry for them (I did feel sorry for them, but that’s not why I cried).  I wept because I wondered if maybe I was next.

And when I think about it, it doesn’t not make sense.