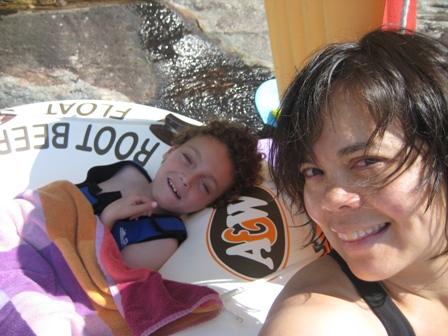 (photo:  summer fun at the cottage)

I have been thinking lately about my role as Owen’s primary caregiver and advocate and the process involved in making tough medical and care-related decisions.  I’d always thought it was quite simple:  do what I think is right given what I believe to be true at the time.  ‘Right’ means 2 things:  what do I think Owen would want, and what would I want if I were him.  Using this admittedly rudimentary yardstick, decisions have included (but are not limited to):

Each of these decisions was followed by loud pronouncements to family, friends, doctors, and then within months completely reversed with much quieter assertions  of opposite intention.  “I will NOT…”  or  ” I could NEVER…” or “I will ALWAYS…”  were replaced by “It wasn’t working so…”  or  “I just couldn’t bear the ______ (lack of sleep, discomfort, hassle – choose one)  anymore”.

So far, no regrets.   Decisions are made, things change, new decisions are made.  But life with Owen is getting much more muddled and complicated and on reflection I see that none of this is simple.  I’d like to move forward having learned something from our almost 11-year journey together.  Maybe I need to broaden my definition of ‘right’ (as in ‘do what’s right’).

As I have mentioned in previous posts, Owen is deeply uncomfortable a lot of the time.  However, his pain threshold and tolerance for the discomfort is increasing.  In other words, he’s used to it.  BUT, and it’s a big but, his pain isn’t the only issue at stake.  At stake are his health, his manageability/quality of care, my health and wellbeing and Angus’ eventual involvement in Owen’s care.  Consider this:

Really, this list could go on and on.  My point is that in addition to Owen’s comfort, I need to consider the long-term ramifications of my decisions and Owen’s ongoing care.  I want him to be loved and cared for for the rest of his life – in order to make this happen, medical decisions must account for this.

I’m going somewhere with this – check the next post.  This one is getting too long, even for me.