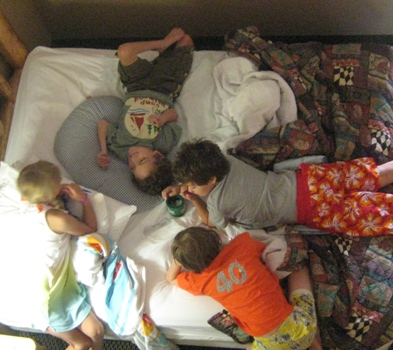 When Owen was younger, my biggest wish for him was to have friends.    I created inclusive play environments, sent him to programs that could seamlessly accept him and his support workers and spoke positively to other children about how Owen was really just like them underneath.  I bought into this notion that if only other kids could see the ‘real’ Owen they would want to be his friend and spent time with him.  They would learn how to sign and use his communication method of the current day (“pick a method, any method…”) – oh, and even use his switch to play turn-taking games!

There is value in these endeavours and in hindsight all were worthwhile, for a whole slew of reasons.

But what about friendship?

I ask myself now, even if this idyllic scene came to fruition, how is this even close?  Sure, Owen has clear facial expressions to indicate his overall likes and dislikes, but nowhere near the nuance of language and/or communication required to establish an independent relationship with someone.  I guess we can define ‘friendship’ any which way, but even the most simple definition of friendship must include the requirements of being reciprocal and voluntary.

Based on this, I can say now with confidence that Owen does not have a single friend.  He does not choose who he spends time with, he does not remember birthdays and he does not lend a helping hand in times of crisis.  And there is not a single person who comes by the house to see Owen who isn’t family or a paid caregiver or from a social services agency.

Here’s what makes this all ok:

Owen experiences moments of connection throughout his day that seem to make him glow from head to toe.    When his brother holds his hands walking down the street.  When Sallyanne or any of his other caregivers arrive for the day and he nearly jumps out of his seat with joy.  When Angus’ friend, D, makes faces at Owen to get a laugh, and announces ‘Owen’s cool!’.

I love and appreciate these moments for what they are – and I don’t pretend they’re something they’re not.  Calling anybody his friend does a disservice to Owen and these experiences because it’s simply not real.  It’s an attribution of qualities that only serves to demonstrate the ‘generosity of spirit’ of the person saying it.  Or, only serves to mask the discomfort of reality.