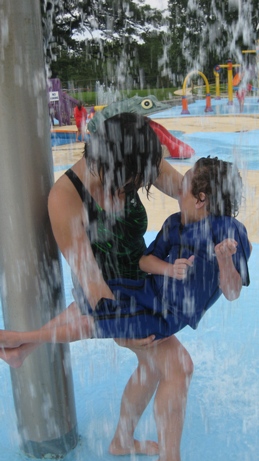 I was told a few weeks ago that Owen’s hip was completely dislocated, as evidenced by an x-ray.  (He’s been getting x-rays every 9-12 months for the past few years, to keep an eye on his pelvis and legs.)   One leg  has become progressively shorter than the other by about an inch, and on the same side, his hip protrudes to the side in an odd way.  I was not surprised to hear these results and was equally not surprised when we were referred to an orthopedic surgeon for a consult.

Well, imagine my surprise when just last week the surgeon said no, it is not dislocated.  It’s still about 40% ‘covered’ and we’ll just need to keep an eye on it.  See?  (gestures to x-ray hanging on lightbox) Look here.  And here.  Nothing to do about it now.  Next!  (He didn’t really say that last one.   Just illustrating how obviously NOT dislocated the surgeon thought Owen’s hip was.)

I said, hold up.  The report clearly stated it was dislocated.

He said I always look at the x-ray itself.  I never read those reports.  They’re almost always wrong.