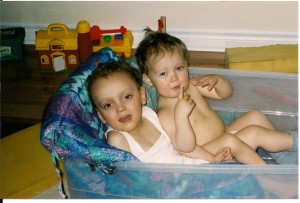 I am watching my boys growing and I am stunned at how quickly their childhoods are giving way to eventual adulthood.  I get ahead of myself a bit perhaps – they’re only 9 and 11 – but they’re over half way to what we typically think of as ‘grown up’.  So I feel entitled to take a moment to contemplate what has come before now and marvel at how much has been packed into what feels like a short time.  And to look forward, and wonder what is to become of these 2 young boys.

Interesting.  As I started writing this I thought it would be about Owen and how he might remember his childhood, and how he might feel he got or didn’t get what he wanted or needed.  Instead, I feel drawn to thinking more about Angus, Owen’s younger (but so much older) brother.

Angus is Owen’s champion.  His advocate.  Often, his voice.  He is outraged at the little indignities Owen suffers on a daily basis (heard on an elevator:  “what a lucky girl to have such curly hair!”  Angus:  “He’s NOT a girl!”)  He is thrilled when Owen knocks over his tower of soft blocks.  He is deeply worried for Owen’s health and wellbeing and does not want to hear about his surgeries or sufferings.   Angus has not one ounce of self-consciousness or embarrassment about Owen and is fiercely loyal.   I sometimes wonder about Owen’s eventual death – Is it soon?  Will I be there?  Will anyone witness the moment?  Whatever morose thing I’m thinking,  I feel the hot surge of my own grief and I then immediately think ‘Angus!’.

After me and Owen’s father, Angus is next in line for taking up Owen’s torch.  Angus knows this although I have never said it.  He often talks about looking forward to getting his driver’s license so he can ‘drive Owen around’.  He wonders what it will be like for him and Owen to live on their own one day, together.  I say nothing, but my heart breaks wide open every time.

I realize now that so much of what I do concerning Owen – how I speak about him, how I engage with him, how I care for him, how I include him – is as much for Angus as it is for Owen.   And it’s for Angus that I must model a life that is balanced, good and, well, fun. I don’t ever want Angus to think that he must suffer or break his back in order to offer love and care to another – his own brother or anyone else.  And I am determined to not let Owen be anyone’s reason for having a bad life.

Regardless of whether Angus does eventually become Owen’s caregiver and/or guardian, I want him to look upon his brother lovingly and respectfully and with an open heart, without the cloud of guilt or fear or burden that so many of us create for ourselves.

And I want him to believe that anything he does for Owen, borne out of these energies, is good enough.