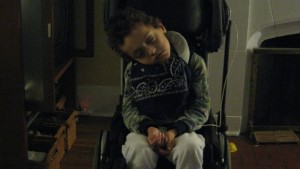 As Owen gets bigger and more wiggly I can sense the forthcoming horrific decisions that are coming my way.  He is not that heavy yet (48 lbs) nor is he that tall (drat, I forget…  he’s short) but consider his size when he’s doing his best imitation of a greased seal and you’ll perhaps appreciate how difficult it can be to manage him.

Owen has virtually no control of his movements due to the unhappy combination of dystonia and spasticity.  Often, he extends through his whole body so powerfully he gets deep marks in his thighs and shoulders from his wheelchair’s lapbelt and chest straps.  When he can’t sit comfortably (which is a lot of the time), he must be released from his binds and laid on the floor.  Because of the lack of support there he writhes, twists and contorts himself into impossible pretzel shapes and must be rescued from himself.  The pressure in his stomach is so strong he pushes up his food and chokes/sputters every time he lies down.  And so then, the only option left is to be held in someone’s lap/arms, supported in a way that provides nothing less than a full-body restraint, using chin, hands, feet, thighs, knees to restrict the movement of a wayward flailing arm, flopping head and extended and rotated leg.  He thrusts, twists, flops and lunges in quick succession, sometimes, incomprehensibly, all at the same time.  I’m exhausted just thinking about it, even as I hear him snoring now in his bed.

While Owen’s condition is not degenerative, it is certainly progressive – meaning, he’s getting harder to manage.  I see that we can’t keep this up.  Not me, his dad, his caregivers, probably not even Owen.  Not like this.

We met with Owen’s neurologist earlier this week, to review meds and talk about next steps.  Again, the only tools in her toolbox are increasing meds and considering DBS – deep brain stimulation.  Increasing meds was an easy sell in the moment, but for a number of reasons it’s no long-term solution.  And so, what of DBS?

To date my reactions to the procedure have been, well, reactive.  Icky scar on the head, invasive battery implanted under the collar bone, scary probe in the brain…  Sounds all science-fictionlike and creepy.  But when I take a step back, I can ask What about heart pacemakers?  Artificial limbs?  What about cochlear implants?  These were all met with skepticism (by some) but are fully embraced today.  This DBS technology will be standard in 10 years. Maybe 5.  Perhaps I will feel foolish for being so resistant now.  Owen would not be alive today were it not for technology.  And anyway is DBS any more invasive than all those medications we give him several times a day, which by the way do little for his symptoms but in some cases create other problems?

I have decided to face my demons and learn more.  It’s only information (I tell myself).   No good decisions were ever based on fear and ignorance.  I am going to get the referral, meet the neurosurgeon and ask the important questions.

Someone has to do it.