(1998) I drove from Sarilyn’s office in the east end to the ultrasound clinic downtown. I didn’t mind terribly. This felt important – I was looking after myself – and also meant I was excused from work for the next couple of hours. I circled the block a few times looking for parking and decided in the end to park in the public garage – something I never do because of a personal principle whose origins I have long since forgotten.

The clinic has its own store-front space in an office building across from a well-known hospital that specializes in women’s health. The waiting room felt like a holding pen for a ‘Pregnant Woman, Frazzled’ casting call. No seats. I checked in with the receptionist then stood in the corner waiting for my name to be called.

I don’t remember feeling anxious. I remember feeling mildly excited – I was going to see my baby! I knew that giving up testing would mean not having an ultrasound picture on the fridge and not knowing the sex of the baby. A bit disappointing but I was ready to take one for the team. Now, ordered to do so, I was going to have an ultrasound for Serious Medical Purposes and a happy side effect would be that I could take a peek.

I was surprised when I was called right away. I didn’t wait long at all. I suppose Sarilyn impressed upon them that I was an emergency case although I am quite sure I didn’t look like one yet. And I certainly didn’t know it.

I laid on the table dutifully as the soft-spoken technician did the scan. The cold gel felt smooth and weird as she guided the roller across my belly. It was painful – she pressed, rolled and jammed the wand into whatever softer pockets she could find around the sides of my belly. I noticed she was repeating certain spots over and over again. 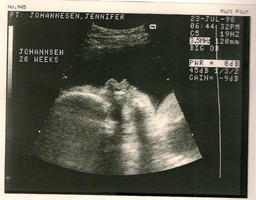 I was surprised to hear her voice because I know she wasn’t talking to me. She was in fact speaking to the ultrasound machine – she was recording video to review later with the radiologist, muttering things into the microphone. Measurements, anatomical bits, findings, interesting things of note.

As I lay there I was also talking – silently, to myself. Wondering if I ought to ask her what the hell was going on or if I should just lie there and wait until she’s done. Don’t want to interrupt. She probably won’t share anything with me anyway. I tried to look at the monitor during the ultrasound process but between the poor angles, bad lighting and the technician subtly edging the tilt of the monitor away from me, I couldn’t make out what was going. Not that full visibility would have meant much to me anyway.

She abruptly got up after many minutes and fetched the radiologist (another woman), who barely said hello and made a beeline for the monitor to watch the recorded film. She leaned into the screen closely, face glowing from the radiating light, eyes tight with concentration, her glasses pushed up onto the top of her head. The technician hovered behind her and stooped in, pointing to this and that while the radiologist nodded. Finally after an excruciating many minutes (2 felt like 100), they both stood up – the technician slunk back towards the drawn curtain behind her and the radiologist straightened her back, looking at me with a steady gaze.

In hindsight, I think this was the moment. This was the moment I knew life was about to change and I barely had time to brace myself. I was eager – desperate – for her to speak to me but also didn’t want what might be coming.

“Who is your doctor?”

I wanted to ask more, demand what was going on, insist on knowing it all right then and there. But it was awkward. I was still lying on the table with my belly exposed, the baby pressing on my bladder and my skin wet and cold from the gel. I struggled to get up – much like an elephant, I had to do it in stages. Instead of front leg, front leg, back leg, back leg, it was roll on side, press with hands, one leg swings down, other leg down, reorient from dizziness. It took a little effort.

By the time I was upright both women were gone.