We were brought to a kind of holding room. Michael walked and I was wheeled. No word of our baby or what was going to happen next. We waited there alone for a long time – easily an hour, perhaps two. No one came to talk to us.

Michael eventually wandered out, looking for someone to give us information. Where is our baby? We want to see him. I had accepted that likely we wouldn’t be taking him home that day. Maybe tomorrow or the next day. That was fine; we weren’t ready for a baby. No diapers, no nursery, no crib. Michael could sort things out while I recuperated and we could bring the baby home when he was over his illness.

Someone spoke to someone and a young doctor came to fetch us. We were led through a series of hallways and ‘inside’ doors – rooms that led to rooms that were part of the inner sanctum of the labyrinth. The wandering public was not allowed.
________

Owen was in a small room, laid out on blankets on a metal table. So tiny. Just 5 pounds. Limbs splayed, flat on his back. His abdomen still swollen and distended, his scrotum rounded and puffed out. His little frog legs were open, knees turned out, heels almost touching. The dark purple colour was gone and he was now more reasonably flesh-toned. I didn’t notice exactly what was sticking out of him where – but he was more or less completely covered in hospital tape and gauze, which fastened various chest tubes, intravenous lines and monitor pads. The ventilator tubing was inserted down through one nostril and aggressively taped to his face. The tape was so tight around his nose his upper lip was distorted into a permanent grimace.  His eyes were covered to prevent discomfort and damage from the phototherapy lights, which help treat newborn jaundice.

We stood there like idiots, mouths gaping, the doctor looking awkward and helpless. I started to cry. 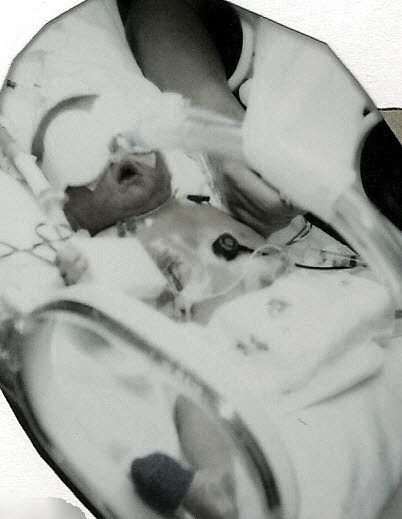 “Oh! Oh, well, yes, yes of course…” Had he never been asked that before?

I approached his tiny self, unaware of the incessant beeping of the monitors and pumps or the slow air- whooshing sound of the ventilator.

I extended one finger and touched the only part of his body that was not covered with adhesive – a small square of skin on the right side of his belly. I touched gently.

The doctor smiled. “They always know the mum.”

There was no sit-down. No official ‘here’s what’s wrong with your baby and here’s what we’re going to do about it’. Instead, endless days (which turned to weeks, which turned to months) of moment-to-moment crisis management and speculation. No prognosis, no words of promise or intention. I came to understand through conversations with the nurses that even healthy premature babies (‘preemies’) stay in the hospital generally until their due dates. For Owen, that meant at least 8 weeks. 8 weeks!  I didn’t know this until some time into the second week of our stay.

That first day, seeing Owen hooked up to tubes and injected with god knows what, I of course had a sense we weren’t leaving any time soon. I wondered where we would stay – surely parents were allowed to stay with their babies. Would we get our own room? Could Michael stay too?  I guess we’re moving in!

I was relieved of my misunderstanding rather quickly. I was to stay in the hospital for just one more day and Owen would be cared for in the Neonatal Intensive Care Unit, or NICU. (I had seen the sign countless times and thought of it as a high-tech nursery. I had imagined sick babies on antibiotics, sleeping in a hushed, carpeted room with fretting mothers at their bedsides, soothing fevers while breastfeeding.)  But of course I can visit!

Once I was in my own room, I asked to see him again.

“He’s been moved from the Resus Room.  To the NICU.”   I was pointed in the general direction, just down the hall. 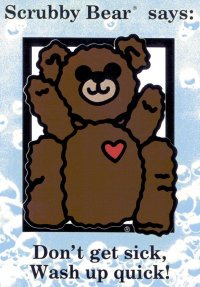 Around the corner, down another short hallway with a bleak seating area.  Photos on the wall of successful ‘graduates’ of intensive care.  Through a heavy white door.   There was an antechamber with a big trough sink and playful-looking signs to encourage, insist upon, thorough hand-washing. One was especially cheerful with a cartoon bear and a quote:  “Scrubby Bear likes clean hands!”  The soap had a harsh anti-bacterial smell, perked up with something floral.  Or citrus?  Not a smell found in nature.  Later, my brother would say it smelled like Fritos corn chips.

A wall phone with a dangling cord hung by a swinging door into the main area. Parents were supposed to use the phone, to ask permission to come in.

I didn’t know. I washed my hands and walked through the door.

The room was noisy and chaotic. Painted bright yellow, it was twice the size of a large school classroom.  With the same kind of florescent tube lighting.  A radio was set to EZ Rock, an adult contemporary music channel, barely audible above the din of the pinging, dinging and clanging of the machinery. Along one wall was a chest-high counter, behind which was the nurses’ station. It was a kind of gathering area for staff of all kinds, conferring on cases and completing records.

Bed stations were positioned around the remaining outer walls, with more stations located on either side of a single interior wall running through the middle of the room. The room was configured like a running track – you could walk in either direction and end up in the same place.

I didn’t see any babies, but I knew they were there. They were in their isolettes, or incubators. Isolettes are see-through, environmentally-controlled plexi-glass boxes, perfectly sized for tiny preemies and their apparatus. The beds inside are adjustable so that babies can sleep on an incline, reducing the risk of fluid accumulation in the lungs. They have holes for all the cables, tubing and monitor leads that need to run inside. They have hinged round windows on either side so that doctors and nurses can reach inside to insert an IV, take a temperature or change a diaper. And for parents to sit for hours with one hand inside, big finger coaxed into the clenched fist of a doped baby, high on morphine to relieve pain and encourage stillness, the pressure of the edge of the window against the forearm causing the entire arm to fall asleep and go numb but the parent refusing to remove the finger lest the baby wake and find mommy or daddy isn’t there.

Many of the isolettes were covered with blankets to keep out the light. Sometime later a nurse mentions how babies in utero are in the dark and this helps to replicate the environment. Right, I think. Sure. Nothing about any of it is like being in utero.

The nurse at the desk saw my bewildered look and rumpled hospital gown and didn’t need to validate what I was doing there. She asked which baby I was here to see, and gently instructed me to use the phone next time. They don’t want parents walking in during rounds (privacy issues – you can’t listen in on another baby’s report) and don’t want parents around if their baby is having a procedure done. (Oftentimes, babies are not removed from their bed stations for some kinds of tests or interventions. It’s disruptive and risky, especially as many are on oxygen and in fragile states. Even x-rays machines come to them. ) 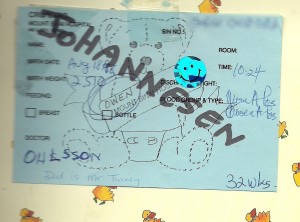 She looked at her notes.