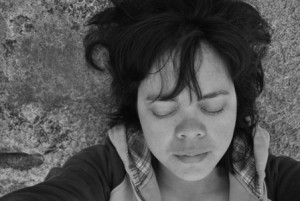 The weekend of waiting. I felt on edge, disconnected from the world, hyper-aware of the unwell baby inside me who was also dealing with this crisis in a much more direct way. To distract ourselves, Michael and I went to an outdoor jazz festival. Sat in the grass, tapped our fingers to the rhythms. Pretended we were just a normal young couple expecting our first baby together.

Did we talk? Did we cry? Did we share how scared we were? Maybe you are hoping I will say yes and tell you how this crisis brought us together. But no. We endured the crushing wait in silence, at times each wondering what the other did to cause this. At the very least: I knew for sure it wasn’t me, and Michael knew for sure it wasn’t him.

What were we to do if the tests came back positive? What was our plan?

I don’t know. We didn’t talk about it.

Four days later we got the call. All preliminary results were negative.

Only momentary relief, reprieve from the fear of Door Number Two. No time for celebrations. 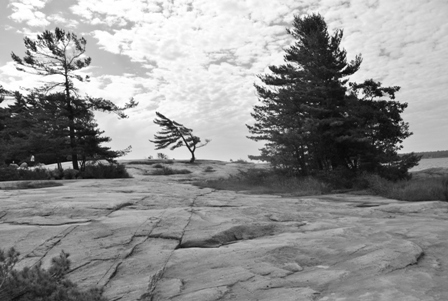 I was lying on a bed in the Case Room, which was used for these kinds of less-invasive procedures. The whole thing was going to be relatively quick – maybe an hour? – and I wasn’t going to be under a general anaesthetic. Better I stay awake, regulate my breathing, tune in to the baby.

The ultrasound machine was directly in front of me so I could watch. I was coached to prepare for discomfort – they could freeze the skin on my belly but there was no way to numb the inside. I would feel the insertion of the long straw-like tube through my muscle wall and through my uterus. I would need to breathe, avoid movement, not distract. Then I would possibly feel the baby move in alarm as the shunt entered its tiny, fragile body. It would be my job to send it calming vibes.

No matter about all these doctors and their equipment: It was all up to me. I held the focus but barely breathed.

I watched the ultrasound monitor closely, along with everyone else. Dr. Ryan was joined by another physician, Dr. Windrim, who was going to ‘drive’. Dr. Windrim would insert the shunt and drain the fluid while Dr. Ryan guided the ultrasound angles. It was a bit like working with chopsticks, and only seeing what you’re doing in a mirror. How would they overcome the inevitable disconnect between hand and eye?

“We will insert the shunt anywhere we can get access, but we have to be careful. Or we might nick the mum.”

His Irish accent was never in the way but this time, I didn’t understand. I thought I misheard.

“Nick the mum. Cut something we shouldn’t. This sort of thing is risky. A mum could die.”

Oh. Whatever. Just save my son.

I watched as the straw went in, disassociating what I felt with what was on the screen. I felt the painful discomfort of the poke, the sliding, and look there! On the monitor! There’s the baby, lying innocently at the bottom. And there’s the bright white, hard line of the straw pushed down through the layers towards it. Like a nuclear missile launched towards an unsuspecting target.

The pigtail shunt was in.

Sometime during the procedure, fluid was drained and collected for testing. Fluid from my amniotic sac plus fluid from his chest cavity. My belly visibly deflated, became softer again, felt more natural.

The hole in my belly was barely visible. Someone asked if I wanted a Band-Aid. 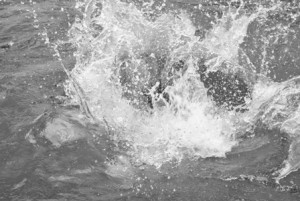 But it wasn’t over. Not nearly.

Fluid would continue to accumulate at a rate faster than the pigtail shunt could channel it out of Owen’s body. It was there to provide a tunnel, a gateway, through which the excess fluid could escape. There would be relief from pressure but that didn’t mean there wouldn’t eventually be too much volume again. It was possible we would need to repeat the procedure.

And now that Owen had a foreign object lodged in his chest, we both required monitoring. Which meant daily ultrasounds, sometimes twice daily.

I was focused on staying calm, not walking too fast, getting lots of rest. I felt huge and the heat of summer didn’t help. My ankles and calves had become swollen and spongy. My uniform was a tank top under a pair of oversized bib overalls. I waddled around our neighbourhood in sensible sandals, acquired on a recent trip to Amsterdam. I was pleased with my own foresight as I slid those sandals on every day, occasionally opening them up just one more notch.

The shunt procedure was repeated a couple of weeks later, resulting in a total of three shunts inserted into Owen – two in his chest and one in his abdomen. And on a third occasion, Owen and I were relieved of accumulated fluid. I felt like a water balloon being filled and emptied over and over again. 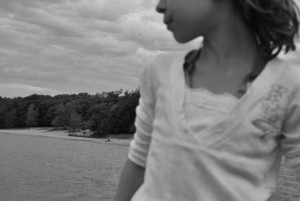 The ultrasounds were confirmation of what I could feel brewing hours before. The skin across my belly and lower back would stretch taut and I had terrible heartburn – the baby and fluid were putting too much pressure on my stomach and interfering with digestion. Each time we had a procedure, I knew it was coming.

I had developed a heightened awareness of my baby, my own body. I slowed way down, stopping frequently to listen. Feel. Soothe. I can keep this up for ten more weeks, I thought, when my baby reaches full-term and all will be well. How we will look back upon this time and be grateful we made it through!

I was so focused on keeping the baby inside I didn’t once think about what would happen if the baby came out.