Sometimes movie trailers show bits of the story line in a narrative arc. You get a sense of the beginning and middle, and of course you are left hanging about the end until you see the movie. I have seen other types of trailers where the editors cleverly appeal to a particular demographic by cutting together similar moments. Pratfalls. Car chases. Misunderstandings. Naked bodies. Similar images that when edited together make the movie seem like it is ALL about that one thing. 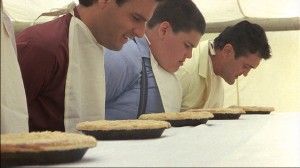 The movie trailer for Owen’s life, as edited for 10 year old boys, would possibly be titled “Misadventures in Barfing”. I say for 10 year old boys because earlier this week my 10 year old boy and I watched that boy bonding movie Stand By Me, and the one scene that got him laughing was the barf scene. By the light of a campfire, Gordie tells the story of Lardass – a name aptly applied in the way that all nicknames from the 50s are aptly applied. He seeks revenge on the mean bullies of the town by entering a blueberry pie eating contest but not before he downs a raw egg and a bottle of castor oil. He eats heartily, angrily even, until he’s so sick and full he’s going to burst. With the strength of a firehose, he pukes on a fellow pie-eater. Who in turn pukes on another. Soon, the entire panel, jury and audience are puking on each other while Lardass sits back and smiles. Hugely funny. To a 10 year old boy.

The movie trailer of this aspect of Owen’s life would include some shots of the daily game of ‘food goes in and food goes out’. But if you’ve ever had or seen a baby you’ll know that’s only funny for a little while. The really funny moments usually involve the puking happening at the expense of someone else.

I have a lot puke stories involving Owen. One of my favourites happened around the time of his first birthday. Mind you, he was already a known puker by then – not yet diagnosed and treated for acid reflux, and known to aspirate/cough while eating which would push up his food.

But in this story we came to understand a different kind of puking we hadn’t experienced in Owen before – the kind that creeps up slowly after eating something that might have been a little off, after a hot day in the sun and while sitting in confined quarters, like on an airplane. 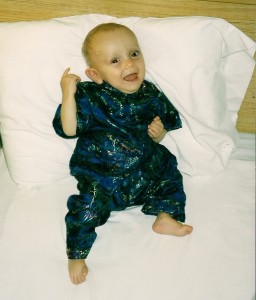 Owen’s first birthday! A backyard party, drop-in style. Invited over 100 people to our quaint Victorian (read small – narrow and tall) home in Leslieville. I spent weeks preparing the food, wanting to get it just right. What a year it had been and I felt ready to celebrate.

I made this weird dish called a roulade – a baked rectangular egg frittata slathered with a creamy cheese concoction, rolled up like a jelly roll then sliced. I froze litres of iced tea into ice cube trays so that when I served the cold iced tea in a punch bowl I could use those iced tea cubes and it wouldn’t be watered down. (I learned this tip from Martha Stewart.) I roasted vegetables every night for a week, stuck toothpicks in cheese cubes and got cakes for every diet – vegan, nut free, gluten free.

The crowning glory – the piece-de-resistance – was the ambrosia salad. Who wouldn’t love it? This variation was made from fresh tropical fruit – guava, mango, papaya, pineapple – stirred with shredded coconut. Cup of orange juice poured on top. Perfect refresher on a sunny day. Like a tropical drink without the headache! It will go so fast, I thought, no need to keep it on ice! Michael was skeptical, I think. Or so he convinced me when less than 24 hours later he was trying to count back to when the trouble began.

The day was glorious. Perfect weather for mid-August. Friends, old and new, there to celebrate, support, admire. Owen was the star – he was passed around to his adoring fans to be smooched and rocked and cradled. I fussed around like a mother hen and thoroughly enjoyed the festiveness of it all. Eventually, the day wore on, the food ran out, the kids got restless, the group thinned out… And I was pleased as punch.

And what a start to our holiday! We were off to California the next morning. Michael had things to do in San Francisco that week and Owen and I were going along for the ride. Cleaning up was quick – most of the food was gone and many helping hands had lent themselves to the various tasks. Just pack, then spend the evening opening gifts.

I said most of the food was gone. But oddly, much of the ambrosia salad remained. I had neglected to move it to the front of the food table so of course no one saw it! Too bad because it was delicious. But no matter. I had committed in those days to making all of Owen’s food from scratch. I blended everything in sight – pastas, soups, stews, curries – anything that could puree into a dense whip became a wholesome meal for Owen.

The ambrosia salad faced the same fate. I hummed to myself as I scooped the sloppy fruit flesh into the blender and watched it whir around. Held up well, after a day outside. Now blended, even more like a tropical drink! Lucky Owen. I froze the puree into ice cube trays for future use, and saved about a cup’s worth into a plastic container. A little snack on the plane during takeoff, to help clear the ears. My child was a little odd, but some things are universal.

Being under 2, Owen didn’t require his own seat on the airplane. Not that he could have sat in it anyway. Michael and I were in a section of three seats – I was at the window, Michael in the middle, another man in the aisle seat. We were among the first to be seated so we had a while to wait before take-off. I wondered if perhaps feeding Owen a bit now would be a good idea. Maybe he would get sleepy for take-off. And maybe it would be awkward feeding him during take-off anyway. I opened the container of food and spooned a little into his mouth.

I had actually cracked it open earlier that morning and feed him some for breakfast. With yogurt. And some cereal. I briefly wondered about the wisdom of combining yogurt and acidic, sugary fruit but hey, I figured, it’s done all the time. Owen lapped it up. Then, and now, as we sat in the plane.

I wiped his face and handed him over to Michael for burping. I needed to adjust the bags, get my pillow propped up. I was so busy moving stuff around I didn’t notice when it happened.

I can’t remember the moment I first smelled it. Is that how I knew? Or was I notified by Michael’s urgent whispers to hand him the wipes?

Anyway, even experienced only once, the scent of ambrosia salad is never forgotten. It fills your nostrils with the perfume of the tropics – luscious and heady. Intoxicating almost. Except when it’s puked because then it’s all of those things plus putrid. Fermented. Mixed with partially digested dairy and it’s a witch’s brew. 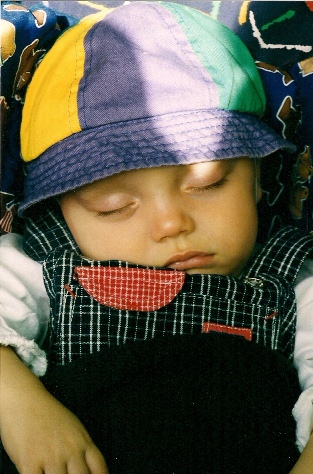 As Michael delivered the last of the pats to Owen’s tiny back, this is what erupted out of our little son and trailed down the side of Michael’s seat, onto his pants, through the crease between the seats. Not on my side, or I would have seen it sooner. It was on the other side, beside the nice man whom fate had selected to sit beside us.

This puddle of tropical delight was now trickling its way to the floor but this wasn’t the worst of it. The smell had immediately started to rise up from the muck and was filling our little 3-seat ecosystem with the stench of ambrosia, barfed.

Have you seen parents hustle after an incident? Marveled at their quick-footedness even though they just missed the knocked-over water glass, peed-through pants, broken vase? We put them to shame. Our well-oiled machine ran through its if-puke-then algorithms: conceal the offense, rid the area of the evidence, pretend it never happened.

The perfect crime was foiled by the smell. And the stains on Michael’s pants. And the splatters on the nice man’s arm.

You might wonder how I knew he was a nice man. I assumed so. Because he never once looked up. Never once freaked out. He didn’t say a single thing. Surely he could smell it. Still, not a word.

Maybe I am giving the nice man too much credit. To be fair, we were already rustling around when it happened. We were already kind of chaotic and jumble-y and had too many bags and things stuffed into creases. Maybe the man (stripped of his ‘nice’ label because now he’s just a man) just didn’t know, and only when he got home or to the conference or wherever he was going wondered what he had gotten on his sleeve.

And maybe, after things had settled and the little blowy overhead air cone had somewhat dispersed the stench to other parts of the cabin and the flight attendants were preparing for take-off, the man didn’t have any idea what Michael was talking about when he looked at me in disbelief, starting a short but awkward conversation by saying, ‘Ambrosia? What were you thinking?!’