One of my brothers lives in Los Angeles and has been in the US since starting college. When we were all younger, he would come home to Canada for Christmas holidays. But once marriage and babies entered the mix we shifted to an alternating plan where we would go one year and he and his family would come the next.

This changed again when Michael and I started our family. Although we had traveled a bit when Owen was an infant, we stopped flying anywhere after Angus was born. Too expensive, too difficult with 2 car seats, too much work. We traveled a little individually but never as a family unit. 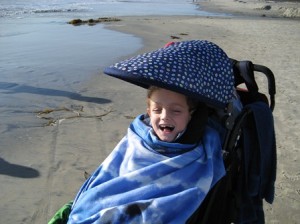 One year, we decided it was time for all of us to finally go somewhere. A natural opportunity arose: we would do the Johannesen family Christmas in Los Angeles! First time in years! We had enough Aeroplan points to fly most of us so it was quite inexpensive. Plus, we’d found an accessible wheelchair van for a very good price. It was going to be great! We couldn’t wait to see how we would do as a family travelling in something other than a van. Who knows? If it goes well we can do it more often!

For weeks we talked about the trip. High on Angus’ agenda was Legoland. Michael was keen to see the sights, get a feel for LA. I personally had few expectations and was happy just to be going somewhere – but I embraced the chance to be a tourist again and did some research, extra keen to find something Owen would particularly enjoy.

After much looking, I hit on the perfect idea: we would include a three-day sojourn to San Diego, and go to SeaWorld.

What a great idea. Owen loved underwater mammals. But not just any kind: the flukes had to go up and down, not side to side – so no sharks. Dolphins, whales and penguins. I noticed his passion when he was about 2 years old, watching television. Some show about dolphins came on and he suddenly went on ‘high alert’. His twitchy body went absolutely still. His shaky eyes widened and focused intently on the screen. A low chuckle followed by an outright peal of laughter. Then he collapsed and caught his breath during the commercials. He has since watched every underwater mammal movie and television show ever made.

I played the video on the SeaWorld website over and over again. Look Bubby! Dolphins! Whales! Penguins! Angus would clap, Owen would laugh, and I could barely contain my excitement that I was bringing my boys to see these magnificent creatures. I set aside my pesky conscience (something about animal rights) and closely scrutinized the park maps and Coming Attractions.

Somehow over those week of planning, the Johannesen Family Christmas had become Bubby Meets Shamu. With a bit of family thrown in for good measure. 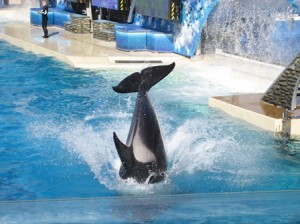 Maybe you haven’t been to or heard of SeaWorld? You should know that Shamu is more of a whale concept than an actual individual whale, although any kid who has seen the commercials will tell you with confidence that Shamu is indeed a particular killer whale – gentle, smiling and eager to perform. I would guess there have been many Shamus over the years, each with its own identity. In fact, in the Shamu show itself there are several Shamus in the water at the same time. But that was okay. Shamu had become a state of mind and we were all on board.

So the Shamu show was to be the highlight. We would schedule our other SeaWorld activity entirely around those golden 30 minutes. Because of the weather and the time of year, there was only one performance that day. Our side trip to San Diego would be scheduled around our trip to Sea World. And we made sure that our bigger California trip plan would bend to fit the trip to San Diego. The Shamu show was like the glimmering pearl in the delicate shell nestled in the sand at the bottom of the ocean.

We decided that all family members would drive down to Legoland for the day, after which we would part ways. The Shamu troupe would head south to SeaWorld, the LA contigent would head north to Westwood and holiday homework, probably not a little bit jealous.

The day had come! We’d spent the night in a hotel so we could arrive bright and early. I was extra pleased because our dear friend Jen had flown down from San Francisco to join us. She had been one of Owen’s first caregivers several years earlier, when she was our next-door neighbour. We were glad to be sharing this great experience with her and I was especially appreciative of the extra set of helping hands.

It was hard to read the brochure because it was such a blustery day. We were all a little underdressed and wishing it wasn’t so cold.

But whatever. Just 15 minutes to Shamu! The whole reason we came to California! We made a beeline for the outdoor amphitheatre which had already started to play the jaunty music that signaled that people should take their seats. We decided to forgo the ‘disabled seating’ which didn’t provide a good view. We wanted to be a bit back, half way up.

The wind, though manageable for us, made for poor viewing for Owen. His eyes were watering like crazy as we tried everything to shield his eyes and still let him see the stage and the water. Hats, shade made with cupped hands, draped coats, sunglasses… nothing worked. In the end, we used his detachable wheelchair canopy. It had a flap on the top that could roll back to reveal a convenient plastic ‘window’, like a moonroof, through which the pusher could see Owen even if the canopy was in use. We removed it from the wheelchair and turned it around. His head inserted into the inner corner perfectly, his face positioned to see through the transparent but hazy plastic. He looked like he was in a poorly-constructed hazmat suit.

The excitement mounted as the showtime music came on for real. I rustled around in my bag for my camera – I couldn’t wait to see Owen’s face when he saw Shamu jump out of the water for the first time. I could guess how it would go – the MC would tell a little story about how Shamu is shy, encourage the audience to tempt her out of her cave, some rhythmic stomping and clapping, maybe call-and-response cheering… a subtle hand gesture from the MC to signal to the trainer to release the whale and… let ’er rip! Big jump, huge splash and oh my god Owen will so love it!

Camera was poised. I turned the lens towards Owen, ready to shoot the film that I knew we would watch and rewatch long after the trip was over.

Owen was on Jen’s lap. She was doing a heroic job of juggling Owen and the canopy and still managing to get herself and Owen facing forward. My view of them was perfect – I could only hope that I would catch the moment when Owen witnessed the big leap. I had a plan: I would keep the video rolling, camera trained on Owen, and I would watch the big moment myself. I mean, who doesn’t love a leaping killer whale?

Okay, quickly now – press Record… steady hand as I wait for the moment. The dark missile-like shadow of the whale is underwater and ready to burst through the surface! Ready , and…

“Owen poked himself in the eye!”

Somehow, in that moment, I was able to take in two scenes at the same time. The first scene played out in the big pool over which the whale, on its descent to the water, fell through the air to splash the eager crowd. The other scene was happening just over there, along the same bleecher – a flurry of canopy and jacket hoods and blankets and arms – in the middle of which sat Owen, eyes squeezed shut, tears leaking from the outer edges of his right eye, his right thumb just millimeters away from his face.

The aftermath of another thumbing incident. We knew it too well.

The crowd cheered and stomped as Shamu slid her huge body up onto the pool deck and waved her flukes at the audience.

Owen’s eyes stayed closed for the next 28 minutes.

When I showed him the footage later, he laughed and laughed.

(Sorry, RSS followers. An earlier version escaped! This is the real one…)