I hold up a child’s book, something large with rigid pages and bright pictures. I sign the actions to Owen, book tucked under my chin, shifting and adjusting as I move. Miming like a clown. Owen watches out of the corners of his eyes – he has this weird and unfortunate thing he does where he can’t look directly at the thing he wants to see. Reflex pulls his head to one side so he can only see things peripherally. So, fine. I’ve learned not to chase his eyegaze because he will only turn away again.

Owen’s eyegaze remains up and to the left, either disinterested in the book, or stuck in a reflex. He is unable to look down with his eyegaze. Has to pull his whole head forward to see anything below mid-horizon.

Watching carefully, I see that Owen’s big toe is wiggling. But that ‘do the opposite’ reflex is in the way again.  If he wants to hold something, his hand shoots open with flat fingers and a wide palm. If he wants to let go, his fist clenches so tight he gets fingernail marks in his palm. Wants to look left, head flings right. In this moment, his thighs are rigid with heels pressed into the back wall of the custom-made footrest on his wheelchair. Padded to prevent self-injury. He’s pressing back to stabilize. Movement of the toe is isolated, scanning back and forth like a radar, searching for a switch to press.

Shit. The switch is too far. Slowly I move it closer. Set him up for success, they said. Bring it to where the toe can reach. Owen is sweating, hands are clenched, elbows wrenched back and shoulders thrust forward, ‘chicken-wing’ style. Switch is within reach! He rubs the outer edge of the switch with his toe, getting his bearings, preparing for the big push forward.

More sweating. Is that anxiety in the creases of his eyes? I wonder what he is thinking.

“Good job! Working hard! Press, Owen! More story? Yes..?!”  I’m getting into it now. Any minute we will see that Owen can think! Respond! Engage!

Something connects finally – message from brain to toe travels like a shot from a cannon. Toe scrunches back, tucked knee straightens, ankle, previously flexed, now extends. Big toe rockets towards the switch, knocking it to the floor, jamming into the side of the metal support bracket.

Owen has stubbed his toe, slightly tearing the toenail. Switch is dangling from its cord, light and buzzer hopelessly, shamefully, quiet.

I hold his bare foot gently in my hand, looking in his eyes. We both have tears, although only his are rolling down his face.

You did want more, didn’t you Owen.

I reposition the switch. I pick up the book, turn the page, and repeat. 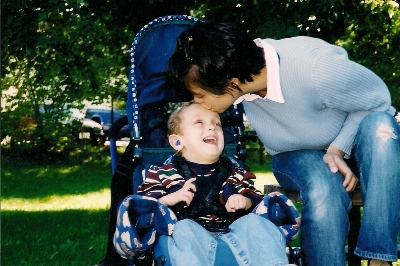