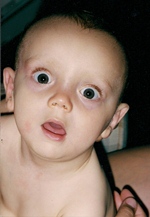 There was no denying it, my boy was unusual. Big round head, like Charlie Brown. Unblinking eyes with impossible eyelashes, like Tweety Bird. He was stiff and floppy at the same time, like one of those dolls with fabric bodies and plastic arms and legs. Careful or he’ll fall through your arms. Careful or you’ll hurt yourself with his hard head.

Michael and I occasionally took Justin to a playground we called Pirate Ship Park. (Justin is Michael’s son from a previous marriage.) Located in a Toronto east-end neighbourhood, it had a climbing structure built to look like a sunken pirate ship sticking out of the ground. I decided to take Owen. We were finally getting out a bit, doing mom and kid things.

Not that we’d been in hiding, but I didn’t have a mom’s group. I’m sure you’ve seen them – marching down sidewalks two abreast, taking over coffee shops. I didn’t have anything against them – I just hadn’t been swept up into one yet.

One time, a neighbour had approached me about joining a mom’s stroller group. Brisk walks through the park, stop by the drop-in center, grab a coffee at Starbucks. New moms, all glowing and chatty.

I was happy she’d asked. “Sure! Let me know when.”

Instant regret.  Hers, not mine.  A look of embarrassed concern came over her face – eyebrows furrow, chin crunches, overall face develops an ‘I just remembered something’ look.

“Ac-tu-al-ly… one of the girls is a little nervous.” I should have walked away then. Who says ‘girls’ anymore? “Let me check if she’s okay with you coming. She gets kind of emotional. Might have a hard time with Owen there.”

I have replayed this moment a thousand times since then.  In one of my fantasies, I punch her.

Instead in this moment, I recoiled into myself, told myself not everyone is as together as me. I should be tolerant.  This is how it goes when you have an odd duck for a baby. And besides, she’s stupid and dumb and shitty.  I was starting to feel a bit warm.

I avoided her after that, dodging inside when she was out. She eventually moved and I didn’t hear from her again.

So it wasn’t with that particular mom’s group that we made our way to Pirate Ship Park on a windy summer day. It was just me and Owen.  Trying something new.  I yanked his little stroller backwards through the sand and headed toward the play structures. 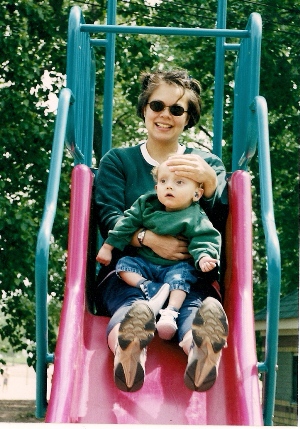 Not Pirate Ship Park. I'm about 5 months pregnant with Angus.

Playgrounds often perplexed me. What do I do with Owen? What is this all about anyway? He can’t sit in those swings. Even the bucket-style ones with space for legs to dangle. I wedged him into one once and couldn’t get him out. Had to ask a playground dad for help. When I changed him later, I saw he had deep pressure grooves on the insides of his legs.

He couldn’t sit in the sand. Couldn’t slide. I could take him down with me but it was uncomfortable on my ass, wider now because I was pregnant with Angus. If it was a twisty slide I would have to pull myself down in stages, with my heels. I was good for once or twice.

So we busied ourselves by watching. Positioning ourselves near other children running around, somewhere out of direct sunlight, close to other moms with the futile hope of striking up a conversation. I don’t know about where you live but Toronto moms are a tough crowd. Either running by with jogging strollers or having lattes with their sisters-in-law. So actually, mostly just sitting and watching, working hard at looking occupied but approachable.

As we sat on a bench my eyes scanned the playground and fell on the pirate ship. Maybe Owen would enjoy standing on the deck, feeling the change in elevation and putting one tight fist against the helm and feeling it turn. No, too windy. And how would it all go down? I’d carry him because I didn’t want to put him back in the stroller only to take him out again, but would have to drag the stroller with me because I didn’t want to leave it unattended. We’d go up top for like 20 seconds, and then what? So not worth it.

Wait! There was more to the ship. Under the deck! He’ll love that! We can watch the kids overhead. We’ll just relocate. Looks like there are benches underneath.

I dragged the stroller back through the sand. I held him as a football player holds a football when he’s running through a pack of oncoming opponents (I’m sure there’s a term for that) – cradled close to my chest while I hunched protectively, ducking under the structure. We fumbled our way underneath and lurched towards the bench over on the far side. I sat down hard on the little seat.

Owen loved sand. He couldn’t sit but if I wedged him between my knees and held him firmly by the armpits, he could sort of stand. Socks off! Toes squishing in the sand, some smooth rocks inserted into tight fists. A sensory activity.

30 seconds, maybe a minute go by. I felt eyes on me. I was becoming familiar with feeling watched. 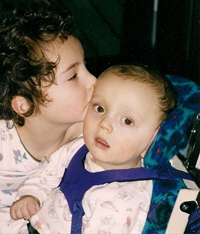 I looked up and met eyes with a very young boy, sitting across from me on the opposite bench. I didn’t know he was there. Staring, mouth gaping. Didn’t look away when I looked up. Looked from Owen, to me, back to Owen, and settled there again. I turned my mouth in a half smile, then went back to my business.

“Hi there.” I smiled bigger. But fake.

In my head: Stop staring. Get lost, brat. Go find your parents. Yes my kid is weird and so are you.

“Do you have any questions you’d like to ask?”

My standard question to small children. Preparing answers for: Why is he like that? What’s wrong with him? What happened to the boy? What’s in his ears?

Jolted out of my irritation, I laughed.

Might as well give him something to tell his friends.

“Cool.” He was clearly impressed.