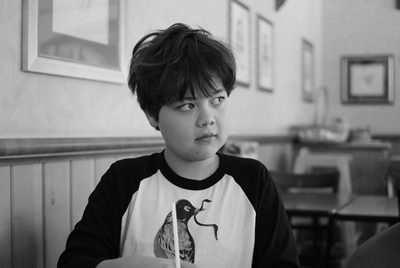 Protector of free speech, outraged critic of injustice and defender of Bubbies everywhere.

Angus is his champion, his pal, his biggest fan. More than this. He is his brother.

Would he have developed self-consciousness about Owen? Would he ever have become embarrassed? He was ten when his brother died and it hadn’t happened yet. Friends have warned of it yet there has never been a whiff of it.

He stroked his hair, held his hand, soothed him, entertained him. Sought comfort from him.  Never shied away from introducing him to his friends, holding his wheelchair when walking down the street, engaging with him on his own terms.

Angus rarely cried before Owen died. In the months following, even less. Until recently.

Sometimes at night, he weeps.   At first I would try to comfort him but it was awkward, hard to get close.  I was ordered to go away.

We have moved through, agreed on a system.  Now I sit at the foot of his bed on Owen’s beanbag chair, pretending to write but really just listening. I wait for the right moment and get him a tissue or a glass of water. As I sit and listen and peck at the keyboard my heart breaks for my remaining son who must now live out his days without his brother. Sometimes, after the tears, he will say something.

“I wish he didn’t die. The world was better before.”

I think about Angus becoming a teenager then a young man with all of this behind him. He will date, travel, meet people. I think about him moving away, going to college, getting a job, falling in love. How will he carry this? How will this loss shape his relationships, his life?

Maybe his partners won’t know right away. Maybe he will hold his brother close to his chest until the time is right. Maybe he will wait until trust is earned and hearts are connected. Sometime between the initial crush and his commitment of undying love, maybe he will say,

“I want to tell you about my brother.”