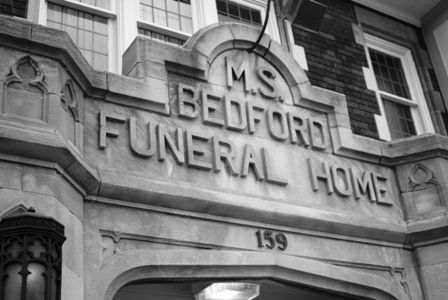 My son had died two days before.  The autopsy had only just been completed and we hadn’t yet sorted out funeral details.  So we had an appointment with Cynthia, a funeral director at the Morley Bedford Funeral Home.  A short walk from my home, it was located in a large gothic-looking house.  I was loath to have the funeral in one of those sleek, modern suburban-looking places.  This place had charm and seemed to be just the right size for a small boy.  Sallyanne was already at my house for a visit so I invited her to join Michael and me.  She readily agreed, said she didn’t want to be alone anyway.

The weather that week was stunning.  Crisp, sunny, too bright for my swollen eyes to handle.   I noticed ruefully it was Owen’s favourite kind of weather as we walked together slowly, not saying much.  Cynthia greeted us at the front entrance, dressed in a respectful black pant suit, white blouse underneath, sensible shoes.  So dour for such a sunny day!  I was confused by the attire until I remembered where I was.

She joined us in the front waiting room as we waited for Michael.  The chairs were positioned around the walls but not grouped together.  We formed a stiff equilateral triangle, facing into the middle.  The hard wooden chairs forcing an upright posture.   Cynthia could see how lost we were so she took gentle control of the conversation.   I liked her right away–no nonsense, professional, sensitive, direct.  Either highly trained or highly experienced, or both.

“I am so sorry for your loss.”

“I can take you on a tour when Michael arrives.”

“We have parking at the side, on the street, and across at the Community Centre.”

There were long silences between the light details, which I didn’t mind.  The space was comforting.  Sallyanne was drifting in her own grief, looking stunned.  And Cynthia was hosting our gathering as graciously as possible.

After another long pause she spoke again: “Oh!  You might be relieved to know that Owen is actually here with us now.”  She had leaned forward in her chair as she spoke.  The last half of the sentence was accompanied by a hand gesture – palms open and facing down, parallel to the ground.   Moving through space up and down, patting the air as if to say, “right in this very spot!”  Her voice had dropped as well, like she was sharing a secret. 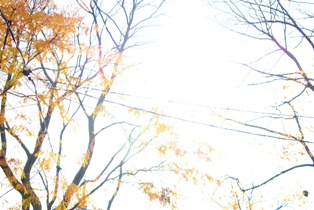 I exhaled a long breath.  Thoughts raced through my mind.  She had been so professional to this point, understanding our desire for a secular service and approach to Owen’s funeral.   The Funeral Home itself was not associated with a religion and I had really liked its understated neutrality.  So what was this?  Had she thought she’d channeled Owen into the room?!  She looked satisfied, pleased.  This was so weird!

I looked around the room, playing along.  What the hell do I say?

I swallowed, noticing my dry throat.  “That’s a really lovely thought, that he’s somehow here with us. . .”  I started to wonder how we would find a new funeral home on such short notice.

Cynthia looked at me, a bit confused at my response.  She continued,  “Yes, he arrived this morning.”

Wow that’s so random!  I looked at Sallyanne, thought I’d catch her eyes, see if she was freaked out too.

Was my reaction so obvious?  Did she see the confusion and panic on my face?  She must have.  “Jen, she means that Owen’s body is here.”

I looked at Cynthia, who nodded, not quite making sense of what had just happened.  “Yes, that’s right!  He’s downstairs!  Resting and comfortable.”

At that moment I felt myself re-enter the room, felt the wooden back of the chair, noticed my feet on the floor, smelled the flowers in the room.  Right, I thought.   His body.   She means his body.  I hadn’t thought about this at all.

“Yes, it’s a bit cooler in there.  To maintain integrity of the body.”

“Where is he exactly?  Describe how he’s positioned.” 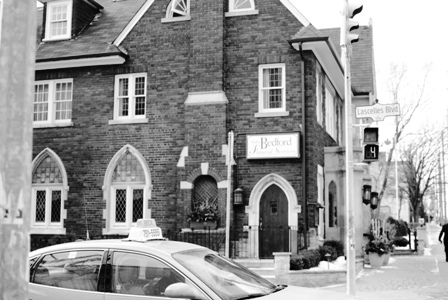 I had seen the emergency crew zipping up the black bag two mornings before.  “Is he still in a bag?”

“He’s on a blanket.  They removed his clothing for the autopsy.”

I felt a cold wave rush through my body.  I shuddered.  I don’t know exactly when I started to cry.

“Please wrap him in something.  Please.”

She returned ten minutes later.  “I laid more blankets under him and wrapped his body in another blanket.  He looks much more comfortable now.”

I felt a grim, temporary relief.  I returned later that day with a set of clean pajamas.