Angus went trick-or-treating with some friends.  Had a fantastic time, in a neighbourhood that goes all out with decorations.  He had deliberated about his costume for weeks: a T1000 (you know. . . the liquid guy in Terminator 2); a hippie; some kind of spy. 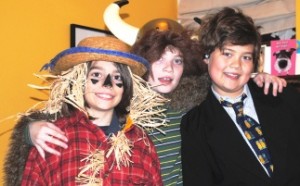 The spy idea won out in the end but slowly morphed into something even scarier–a business man!  Complete with bluetooth headset, full suit jacket and pants, whimsical tie (selected from the Value Village – fish wearing raincoats) and what every business man sports these days–a moustache?!  He was adorable I must say.  Reminded me of my favourite TV show from the 80’s, Family Ties, in which lefty parents are saddled with a budding Young Republican. 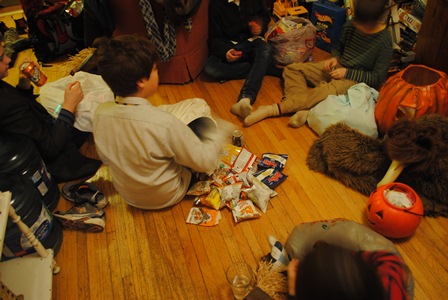 I arrived to pick him up and the kids hadn’t yet returned from their outing, so I joined the other adults (friends? family?), who were enjoying some wine and conversation.  They had been at it for a while and I don’t drink, so I mostly just sat back, listened, enjoyed the atmosphere and the anticipation of hearing the boys’ excited tales of the evening.  They finally came back, immediately dumped out their sacks and started to compare who got what.  (Brief aside:  someone got 5 cans of pop?!)

Lots of laughter, photos, stolen Coffee Crisps from the loot. . .  then, a question from behind me:  “Is he your only child?”

I turned to look at the woman who asked–she was, as they say, half in the bag.  In a friendly, amusing way.  Just making conversation.

I stalled for a moment, said “One is plenty!”

She was still looking at me.  Knew my thought was only half finished. Waited patiently for me to finish.

I nodded and mumbled, looking away towards the boys, “Yes, he is.”  And felt a little bit sick for saying it. 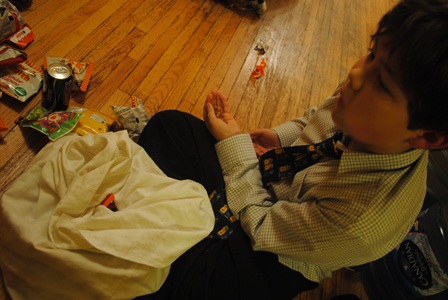