I spent a good part of my childhood living in a subsidized housing complex in Kitchener. I didn’t know that it was dingy or small or that our neighbourhood was poor or what government subsidy was.  I thought of it as home.  And truth be told I was just grateful we didn’t live in one of the low-rise apartment buildings across the street which always smelled of ‘foreign’ cooking and Lysol.  Which I suppose is amusing as we were the most foreign people around.  Our complex was comprised of 20 or so two-story, single-family townhouses. My family–me, my mom, and my older 2 brothers–lived in a unit close to the end of a long row, facing the street. 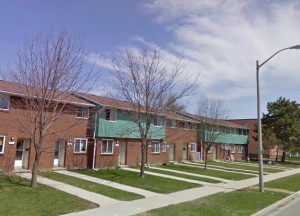 I was part of a group of neighbourhood kids who would gather in the open areas on afternoons and weekends. Sometimes we’d play hide-and-seek.  Sometimes we’d form a bicycle gang and ride en masse to the variety store–spend our nickels on Dip Stix and Big Chew and return with gnawed-on popsicle sticks which we’d dry out and sharpen into pointy knives on the pavement.  Sometimes we’d ring random doorbells or hang out in the community playground or try to boost each other up on to the metal hydro boxes.

We rarely went into each other’s houses and only vaguely knew where each other lived. I didn’t even know many of the kids’ names. We tended to gather on the sidewalk and grassy areas close to my side of the complex – for me, the other side of the development was a different universe.  Dark and mysterious.

A summer’s day. Some of us were outside, a bit bored, in the lull between lunchtime and the next fun thing.  I was sitting on the curb and picking through the grass, looking for clover stems to suck on.

One of the girls sidled up to me. A kid I barely knew. “Hey, come on.” She nudged me on the shoulder with her knee.  There was urgency in her voice, compelling enough that I scrambled to my feet.  “The sick boy is outside!  The one who is going to die.”

I didn’t have time to take in what she said, never mind respond.  She grabbed my wrist and pulled me in the general direction of the main driveway of the housing complex, which led to the back parking lot and which was lined with townhouses on either side.  We sprinted together to the end of my row, veering around the corner where the sidewalk met the driveway.

The  girl screeched to a halt, cartoon-like. I collided with her back as she then resumed moving at a slow walking pace. That was my cue. I scanned the front yards, trying to find the dying boy, wondering what a dying boy looked like. 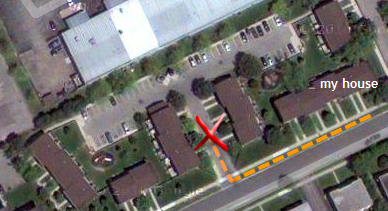 Two units in, a woman was sitting on the concrete step in front of her door.  She looked trashy–which in my seven-year-old viewfinder was evidenced by her scraggly ponytail and white tank top, which I didn’t think was quite right for a mom.  She was with a small boy who had bright white-blond hair.  He was wearing a striped shirt and red sporty shorts. Couldn’t have been more than 3 years old.   He was sitting on the walkway in front of her, playing with sand toys.  He looked fine to me.

The girl walked–no, sauntered–half a step ahead. She was leading our mini-procession but also pressing herself backwards into me. We were like Siamese twins, leaning into each other as we moved forward, glued together. I didn’t know what was supposed to happen but thankfully she was in charge. I braced myself to run, just in case.

The woman looked up at us and gave a half wave. She took a long drag from her cigarette and blew a cloud of smoke over the boy’s head.

“How is he doing? Mom says he’s getting worse.” So she knew them! I relaxed a little.  The girl elbowed me lightly in the stomach.

“Yeah. Look…” The woman hoisted the boy up off the sidewalk and plunked him on his feet. “Walk to the end and back. That way. Go.” She nudged him forward.

The boy looked a little stunned but did what he was told and started to walk. He put one foot in front of the other as expected but as the back leg started to lift, his front knee began to wobble. Like a drunken sailor, the boy staggered and jittered his way down the front walkway towards the edge of the driveway. He traveled about three steps when the mom rose up and moved to support him under his armpits, lifting slightly to relieve him of his own weight and stop him from toppling over.

“See? Last week he could go to the end. Not any more.”

I stared at the boy trying to decide what his problem was and wondering why the mom was showing him off, while the girl twirled her hair and snapped her gum, making small talk.  Then the adventure ended almost as soon as it began.

“Okay bye!” she called out cheerfully, then to me: “C’mon let’s go.” She grabbed my wrist again, turning us around to head back to the street. Before we left, she leaned in close and whispered in my ear, “He drinks his own pee! That’s why he’s like that.”

We made eye contact briefly, then I looked back at the boy.  This news changed everything!  No wonder she dragged me over like he was a circus act.  There was more than meets the eye!  But she was probably lying.  But then again she was so confident it must have been true.  And besides, she knew them. She tugged my arm again and we took off running.

As we made it back to the safety of the street-facing row of townhouses, I caught my breath and tried not to look freaked out. Tried to remain calm despite having seen with my own two eyes a boy who was going to die because he drank his own pee.

I thought about him frequently over the next few days–pictured the scene, heard the voices, thought of his white-blond head, wondered how someone could die from doing something which was surely gross, but dangerous? and once or twice tried to figure out how it could even be possible for a little kid to accomplish such a thing–but eventually I just forgot. My memory of that afternoon became coloured over by the rest of the summer. Sleepover camp, visits to my dad’s, lazy summer days of everything and nothing.  I forgot until many months later, when during another bored lull before the next round of hide-and-seek, for no particular reason, I thought again about the girl and the boy and the mom with the cigarette.

I worked up the nerve to ask another boy who lived on the driveway side of the compound, “The little kid who drank pee. What happened to him?” I couldn’t bring myself to say “the boy who was going to die.” He was too cute, too small.

“Dunno.” The boy shrugged. “Got sick and moved away I think. They don’t live here anymore.”

I shrugged along with him, caring more than I wished to let on. I wanted to believe that they moved away because he got stronger, and that somehow the mom became a better mom just for him, and that she wasn’t sad somewhere because her boy had died. But even then I wasn’t much one for kidding myself.  I knew better.