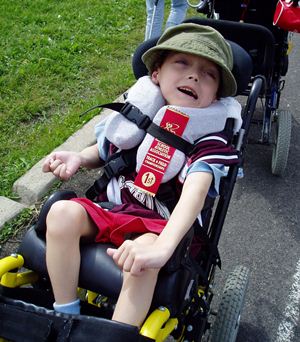 In my book I recount a number of moments of cheerful pretending  in Owen’s life (of which there were many), including:

As I write this out, I see how ridiculous this all is.  I think others in my life at the time, who did not have children with disabilities, also saw the ridiculousness.

But when we’re in the thick of it, we tell ourselves these stories, attributing qualities and achievements and character to these children as though if we didn’t, there would be nothing there, nothing to marvel at. We think of these cheerful attributions as being noble somehow, or as recognizing the ‘gift’ of each child.  But it really just reveals how far we haven’t come in honouring the humanity and presence of each child.  For many of us, this kind of lefty, politically-correct interference and sloppy interpretation of what is actually real is irritating at best, infuriating and depressing at worst.  And as I write in my book, it seems like there is no one to tell, and no one who will agree.

Of course this isn’t just about teachers and therapists.  Parents can be guilty of this too.  We can fail to look upon our own children with an unflinching gaze,  unafraid of what we might see, without the judging or can-do motivational voices in our heads.

Might be interesting to see what would happen if we stopped feeding lines to each other.  And ourselves.