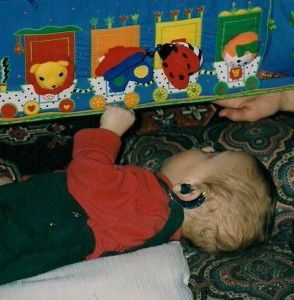 Within months after Owen was born, I was told he was deaf. Inside, I shrugged. “Oh well,” I thought. He almost hadn’t been born. He almost hadn’t lived. He almost didn’t come home from the hospital at all. Deafness didn’t seem like a real problem to me. People are born deaf all the time, aren’t they? And they manage, right? It was a guess, but it seemed logical.

His deafness came more and more to the forefront of our lives as therapist after therapist emphasized how difficult language acquisition would be considering he couldn’t hear. He had hearing aids which gave him some environmental sounds, and he’d been doing auditory-verbal therapy for a while – but words and language? Couldn’t hear them. We all agreed that he would need a visual mode of communication.

No one in our direct circle of care was opposed to sign language, in theory. But they had legitimate concerns. How many deaf people do we know? Where will he go to school? How will he communicate back? One of the biggest concerns was that American Sign Language is fleeting, like spoken language. Sign it in the air, and it’s gone. How were they going to use the tools of choice-making, voice-output, auditory scanning?

English and American Sign Language (ASL) are both complete, robust languages. Spoken English though, has a direct one-to-one correlation to written English. You can write what you say. ASL has no written counterpart. It must be captured in essence, then written in English. We could use signing to convey nouns and verbs but there was no real hope of proper language development with such a mishmash of approaches and with Owen’s inability to expressively communicate in ASL himself.

So, English it was. Written, spoken, picture representation, supported with occasional signs for the nouns and the verbs. I was armed with strategies and Velcro and picture cards. Checklists, binders, goal sheets for logging progress.

I was taught to see everything as a teaching moment. That the possibilities for language acquisition were endless! And that his only hope for receiving and expressing language was. . . me. 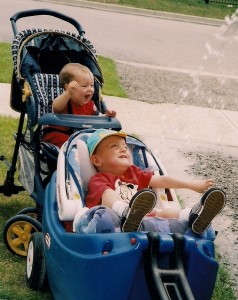 What a traveling sideshow we became. At the zoo – pushing Angus’ stroller in front and pulling Owen’s wagon behind, binder in my backpack and key photo cards loose in my pocket. “Look Owen! Fish!” Hand undulating in the sign of a fish, pointing to the weirdly pale puffy creature in the eye-level aquarium, then blocking Owen’s view with a photo of a fish that looked nothing at all like the thing in the tank. Then, pause to dig out the photo of a butterfly, the exhibit of which was just around the corner. It all took less than a minute, in a waking day comprised of 720 minutes. So much to do.

What an unnatural and frustrating way to spend time – facilitating every moment of family and social interactions for someone else. It actually required that I exit the scene, disappear from the experience myself, and try to see it through Owen’s eyes so that he could be there instead. In those moments, it left Owen without a mother and me without the pleasure of being with my boys.

I eventually stopped. It was a years-long attrition of letting go of the effort, of not caring any more, of seeing the absurdities and uselessness of such intensive facilitation. Even if there were small gains, they were not worth the cost. Instead, I turned to our back-up plan, our last resort: ASL.

I became fluent, hired deaf support workers, became involved in the deaf community. I won’t lie: It was hard work for me and more than a bit humbling. But so much easier than other attempts at language development because I could stop trying to force Owen to learn and perform. Rather, I surrounded him with a full language in the hopes he would absorb some of it. And clear the way for actual experiences instead of mediated experiences only brought to Owen through the construct of picture cards, gestures and over-articulation.

Owen’s deafness had started out as being the worst of all possible disabilities. The therapist had looked sad, serious. Said, “We can do amazing things for kids with disabilities to help them access language. Switches, controls, voice output, sensors, eye-gaze. Use the hand, foot, head, knee – anything they can control, we can harness. But if he can’t hear? Well. . . it’s much, much harder.” I remember the moment as grim. 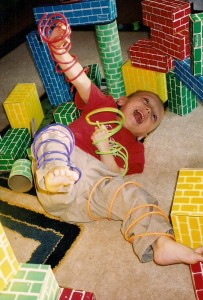 Now, years later, Owen’s deafness ceased to be an actual problem. It went from being the most of my worries to the least. It went from being the severest of disabilities to just one of many characteristics that made him uniquely who he was. The about-face was so complete that there were many times I forgot he was deaf. Or, I forgot that his deafness was a particular thing any more than was his curly hair or his funny duck-like quack.

I can’t say that Owen learned to communicate with sign or that he understood everything that was being signed to him. I have no idea how much he took in and processed. Or at least, I can’t prove it. But I can say that everyone around him relaxed. I can say that Owen seemed to enjoy life more and that there was less in the way of him having a good time and connecting with others.