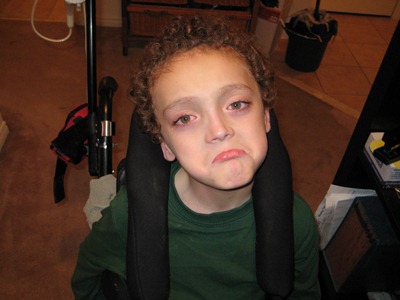 Owen would occasionally cry so deeply that if you were to witness him in those moments it would shatter your heart.  It would start small, imperceptible to those who are  unfamiliar–but once it began, there was no stopping it. Many tried to jiggle or funny-face or tickle him out of his despair, always losing in the end and in fact escalating his intensity.

It always began on the tip of his bottom lip which would protrude and quiver just ever so slightly. Then you could see it move slowly, further into his head, up to his nostrils which would flare, then into his eyes, filling them with round bubble-shaped tears which would immediately threaten to spill out of their lower-lid cups, surface-tension holding them in place until the well of liquid simply became too much.

Once the dam broke, it was like he knew he was done for and might as well just commit to the whole thing.  Next came the full-body shudder, the big gasp-y breaths between high wails of sorrow only heard in movies, usually off-screen.  Sometimes the wails would drop in pitch to something low and scratchy, as though his throat was closed off and his belly was forcing the air through anyway.  His arms would soften but float out to the sides.  Like he was a bird, soaring. All the while, Owen would maintain eye contact with you.  Eyes fixed on yours.  Imploring, maybe?  Demanding?  It’s hard to say.  I can’t think of a time when his episodes of sorrow were brought on by something in particular. They came out of the blue.

Sometimes the sorrow would turn angry. Dark rain clouds seemed to form over his head, cartoon-like. His green eyes would go almost black and deep stress creases would appear all over his face like a wrinkle dog. And he would howl out the frustrations of his soul. 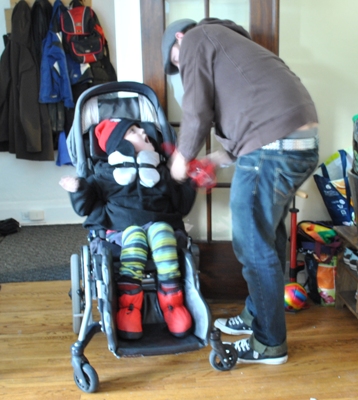 I was working from home that day, a warm Friday in October.  I was sitting on the sofa, feet up on the coffee table, computer open on my lap.  The sofa is near my front window and I heard the ruckus outside of Mark returning home with Owen from an outing.  They were coming back briefly to prepare to go to Michael’s–it was his weekend with the boys and Mark was going to take Owen downtown to Michael’s condo near Harbourfront, on the subway.

When Mark and Owen entered, I could see that Owen had already started. Poor them!  Mark looked concerned and flustered. Owen looked, well, furious and sad and manic. This was possibly the first time Mark had seen this side of Owen and boy, it was the Mother of all Sorrows.

Mark quickly unbuckled Owen from his chair while I moved everything aside and prepared to hold him, which in itself is a bit of a production.  Move to the corner of the sofa, fluff the pillows, sit your bum way back in order to have proper back support.  All set!  Mark placed him on my lap.  I shuffled us around so that he was seated sideways, legs dangling over mine to one side, his back braced against my right arm.  This way, we could see each other.

We held each others’ gaze as he cried and I breathed.  I didn’t try to make myself look calm for his benefit – just holding him and seeing him cry made everything inside me drop a few notches.  Nothing else mattered and no one else existed.  His sorrow moved into the space between and around us and held us for what felt like a very long time.

I’ll be honest: I liked these moments.  I could hold him close, loosely and easily, swaying slightly or rubbing his back, and know that I was doing something that mothers all over the world do. I could offer an abiding calm and comfort to my child–an act so normal, so right.  It was a rare treat to offer him this solace.  It happened maybe once every six months.

I don’t remember what broke the spell. A glimpse of Mark, or a shift in position, or maybe it had just run its course. Owen eventually started to breathe normally again, his odd but usual-for-him muscle tone returned and his attention moved to the television, which had been turned on so that Owen would be entertained while Mark assembled his overnight things.  I laid him on the floor in his customary bed of pillows, and returned to my work.

I was glad that Owen had held things in until they got home and that I could be there for him and Mark.  I was also glad they were leaving; it was my weekend off and as soon as they were packed up, they would be heading out and I could look forward to a peaceful weekend.  I felt a pleasing  satisfaction as I waved goodbye to the two of them as they rolled down the street.  Happy to have been with them, happy to see them go.

It was a perfect last time. 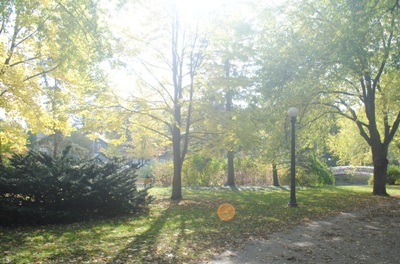