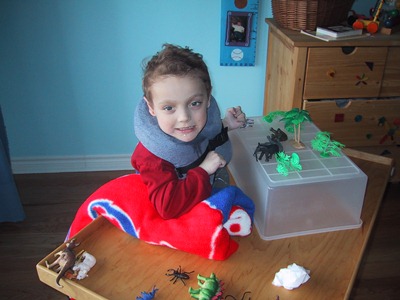 I remember the first time, years ago, when I saw the video of Team Hoyt. (If you don’t already know: Team Hoyt is an athletic father-son duo – Dick Hoyt carries, rows and cycles his severely disabled adult son, Rick, through grueling triathlons.) It was sent to me by a friend, with a note that said, “I saw this video and thought of you and Owen! How inspiring!”

I hesitated to press play. But I watched. Rather not inspired, I felt irritated, confused, and not a little put out that someone would think of me when she saw this video. I had no idea how to understand her excited note, or interpret what it said about me, or Owen, or her.

At the time, my son was around four years old. Owen was born with multiple severe disabilities (primarily spastic quadriplegia cerebral palsy), which meant he couldn’t walk, sit, crawl, stand, hold up his head or swallow safely. He was also deaf and non-verbal. He was four years old and I was only just beginning to come to terms with his disabilities. I had thought for a precious, short time, that he was just a bit behind and would likely outgrow his lack of function. “I think he’ll be a typical ‘preemie’,” I said to friends, “Slow to develop at first but he’ll catch up!”

Instead, Owen missed developmental milestone after milestone, always looking and behaving like the weirdest baby you’d ever seen. Like most kids with disabilities, he was charted against regular developmental tables. Owen’s results always flat-lined across the paper while the ‘typical child’s’ line would curve mockingly upwards. 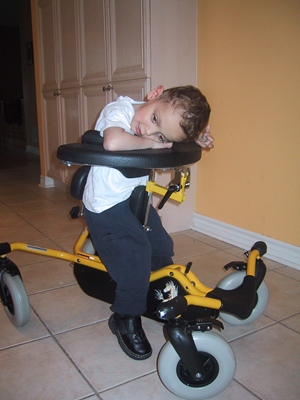 Finally, sometime in his third year, he was given an official diagnosis of cerebral palsy, along with a dishearteningly vague prediction that he may or may not ever develop beyond his current state. I had yet to muster the courage to contemplate what might lie ahead.

So, the video arrived at a bad time. It jolted me because, as the images flashed across my computer screen, I sensed that my son was easily as disabled as Rick Hoyt. And that no amount of triathlons or viral videos or inspired email exchanges was ever going to change that.

Medical and therapy teams were encouraging in our pursuit of improvements for Owen. They were always focused on possibilities and potential, looking to maximize and harness Owen’s strengths in order to move him in positive directions. “You never know what they’re capable of,” a therapist said, “It’s always better to try! Don’t close any doors!”

To that end, we explored endless configurations of switch access and devices in order to facilitate choice-making. We tried dozens of wheelchairs, standers and walking frames to aid mobility and appropriate positioning. We experimented with picture symbols, sign-supported English and Blissymbolics to support language development. Like many parents in my position, I became a better expert than the experts and even developed my own programming and tracking sheets, so I could offer reports and progress notes at our frequent team meetings.

I totally embraced it. I loved the busy-ness and productivity and positive reinforcement from the professionals, doing everything I could to give Owen the best possible future. I couldn’t imagine doing any less, and was always trying to figure out ways to do more.

As I continued to immerse Owen and myself in his therapies and treatments, I could finally identify with Dick Hoyt (Go Team Owen!). Or, I should say, with the media image of Dick Hoyt. I was running my own triathlon, carrying and rowing and cycling Owen around with me, showing everyone how anything is possible if you just apply yourself. If you just try hard enough. 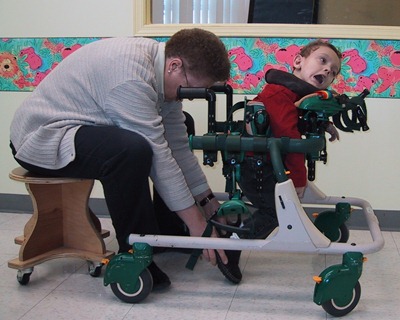 I didn’t crash in an obvious way. I didn’t flame out or shrivel up or find myself in a psychiatric ward. Sure, I was getting tired. But that’s not what slowed me down.

Instead, I was gradually awakening to the fact that not one of our interventions, despite our best efforts, was actually helping Owen. Small progress might be noted here and there, but it was inconsistent and hard to repeat. At the park, in the store, even at the dinner table—there was no time or space for rigging up the picture board along with the switch and the buzzer and the mounting apparatus and the photo cards. All of our lessons seemed to be for the lessons’ sake, without practical application. Granted, this is how learning often happens: a skill is developed in an artificial and safe environment, to be brought out into the world when ready. But, we were taking up his entire childhood—years—so he could learn what . .? Apple? Dog?

At the same time I was coming to my own understandings of this futility, Owen experienced a sudden medical catastrophe that landed him in intensive care for many weeks. His implanted medical device, an intrathecal baclofen pump, seemed to be causing extreme disruption to his body. He was unrouseable for over 24 hours, and for the first time in his medically-complex life, I wondered if he was going to die.

I had already begun to withdraw Owen from his therapies by the time he was hospitalized, and the reality of his health status made it a fait accompli. I even withdrew him from school, and organized a youthful, eclectic caregiving team to fulfill my new goals for Owen: varied and meaningful community-based experiences and interactions, at a pace we could all manage.

I made the change just in time; Owen passed away just two years later, at the age of twelve. I am grateful to have few regrets. He had a good life, which included two wonderful years in which we didn’t try to achieve anything, and more importantly, I didn’t try to prove anything. I had dismantled Team Owen.

I was no longer reactive to the Hoyts’ story because I had found my own way to be. “Good for them,” I thought, and I meant it. I thought of them as archetypes, not heroes. I found contentment, deciding for myself that ‘trying hard no matter what’ just wasn’t serving us well anymore. And maybe, it never did. 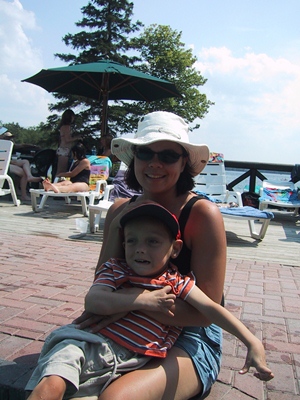 (This is the article rejected by Abilities for not being empowering or positive enough.)