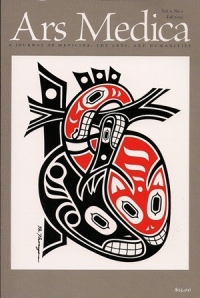 It had become an annual event. Owen’s pneumonias seemed to happen every spring, a kind of rite of passage to clear the lungs in preparation for the inevitably muggy Toronto summers. We could always tell when it was coming—started with mild lethargy and weak smiles, continued through a body-heat phase that made his skin weirdly dry and clammy at the same time, right on through to the wet cotton-candy mucous tinged with yellow that he would cough up violently, causing the thick vein in his skinny neck to bulge. We eventually learned to read the signs before the next phase would start. Inhalants, antibiotics, steroids, and chest therapy became our spring tradition.

This article is available in the Fall 2012 issue of Ars Medica, A Journal of Medicine, The Arts and Humanities, published by the University of Toronto Press.

Masthead and Table of Contents | PDF of my article

I am probably telling this all wrong. As I write this I can now remember Owen in the hospital for pneumonia in the fall. And another time in the dead of winter. And not a few overnight stays in the summertime, when I was glad for the air conditioning and bright sun streaming down the hallways. When I try to recall these things accurately my memory can be alternately out of focus, and sharp as a tack. I try so hard to get it right but the recollections are slippery and tricky, morphing to suit whatever story I think I want to tell. I suppose it’s understandable. . . Owen has been gone now for sixteen months.

He died when he was twelve. The timing and circumstances of his death—alone, in his own bed, as healthy as he’d ever been—was a huge surprise. Unexpected, unexplained. In fact, the coroner agreed; his listed cause of death is SUDEP, Sudden Unexpected (or Unexplained) Death in Epilepsy. I have to admit I laughed when the coroner told me. He had to reassure me that it was indeed a real diagnosis, I could even Google it, and yes ma’am it is indeed a real thing. He clarified that, in our case, it was a diagnosis of elimination. Nothing else could explain Owen’s death and he’d had a history of seizure disorders as an infant. So, fair enough. I didn’t care any more about this ambiguity than I did about the lack of diagnosis for his condition while he was alive.

On paper, Owen was a collection of symptoms and descriptions. Spastic quadriplegia cerebral palsy, deaf, nonverbal, non-ambulatory, g-tube fed, incontinent, fully dependent for all aspects of daily living. He was also born 8 weeks prematurely and experienced a host of problems prenatally for which he required surgery, in utero. We had no explanation for any of this other than that a part of his brain—the basal ganglia, an important part of the deep brain that controls motor function—was underdeveloped. Why, no one had any idea. Often this malformation is caused by kernicterus, the result of dangerously elevated bilirubin in infancy. But this wasn’t our case. And besides, his troubles had started long before he was even born.

Owen had multiple severe disabilities all of his life. He certainly had a lot going on but none of his conditions were obviously life-threatening. Except for his weak and compromised lungs. At the best of times his breathing was noisy and wet. At the worst, he struggled ardently to catch a breath. Stridor, they called it. ‘Turbulent air flow in the upper airway’ causing high-pitched wheezing and reduced air intake. His skin would become frightfully pale, his body warm and limp, his chest would collapse inward as he tried to inhale. Evidence of a hard fight against infection and fluid accumulation in the lungs.

I always knew his lungs were his weak link. I had imagined that Owen would likely die because of pneumonia or related complications. So perhaps I shouldn’t have been surprised when, during a spring stay in the hospital, the doctor pulled me aside and asked if I would consider signing a DNR order.

Owen was around six years old. Despite the frequency of visits to the hospitals all over the Greater Toronto Area, I had never been asked before. I wasn’t even entirely sure what a DNR was.

“It stands for Do Not Resuscitate,” she said.

The words drifted in through my ears and settled somewhere deep, probably near my own basal ganglia. My body felt warm and clammy, my breathing suddenly becoming more shallow. Perhaps it was sympathetic pneumonia, a way to connect with my little boy passed out in the hard bed just on the other side of the wall.

“That means you don’t save him if it looks like he’s going to die?”

“It means no heroic measures. It means he can die peacefully.”

I imagined rib spreaders. Emergency transplants (of what, I had no idea). Months on life support. I imagined failed dramatic rescue attempts that I would live to regret. Previous doctors had warned that kids like Owen, if placed on a ventilator during an illness, sometimes don’t come off at all. I pictured a permanent breathing tube.

Her suggestion seemed so reasonable. I didn’t want my boy to live like that. And he probably wouldn’t live through those interventions anyway. It was a short conversation.

“Sure, I’ll sign it.”
_____
When I told Michael that night, he was quietly horrified. Why hadn’t I thought to ask him, check with him first?

He wasn’t accusing me of not caring. I knew it then and I know it now. I had dedicated myself completely to my two sons and had provided Owen with a quality of life that was almost unheard-of for a child like him. No, Michael wasn’t thinking I was harbouring a death wish for Owen. I think instead he was accusing me of making an uninformed decision, one that I had made unilaterally, unexplored and unquestioned, in a highly uncharacteristic fashion.

I felt my insides collapse. He was right. I hadn’t considered the decision carefully and had signed the document as casually as I had signed the request for a television in the hospital room. I couldn’t even tell him what the form said. I felt I had failed our family, myself, my son. I called the hospital and had it removed from his file.

Owen didn’t die then. In fact, it was as though the DNR gave him the push to get better. He recovered in typical Owen-fashion —practically bounding out of the hospital (at least in spirit) with the clearest lungs ever and a look of thrill on his face as he breathed in the fresh air as we emerged through the automatic parting doors to the outside.

After that, I didn’t give another thought to the DNR. Not to the specific one I signed and not to the overall idea. In fact Michael and I didn’t even finish talking about it. We didn’t need to; I think we both felt we had dodged a bullet and our discomfort with the whole topic manifested in silent, complicit agreement that we would never bring it up again.

The months and years rolled on and as a family, we ebbed and flowed with Owen’s pneumonias and other health-related problems. Sometimes I wondered, “Is this going to be the one?” But not often. Pneumonia had become so much a part of who he was that we were used to the sudden drop and surprisingly quick rebound. Eventually, the once annual event became less frequent and less severe. Our ability to help prevent its onset and lessen its severity had reduced each subsequent pneumonia to one that we could treat at home, like one treats a common cold.

So it wasn’t because of the threat of pneumonia that compelled me, years later, to sign another DNR.

Owen was around ten years old. He was recovering, at home, from a health crisis which had required a six-week hospital stay in intensive care. (I am fast-forwarding deliberately. I am skipping past the part where Michael and I split up and I moved into my own apartment, and I tussled with my soul to figure out how life was now supposed to go.) Looking back now, I find myself wondering why no one raised the question of a DNR. At one point Owen had been somnolent—unrousable—for almost 24 hours. He was in a tailspin of symptoms that alternately looked like overdose then underdose of a medication that was being administered directly into his cerebrospinal fluid, through an implanted device called an intrathecal baclofen pump. It was a confusing time for everyone. Surely, it would have been the right time for someone to suggest a DNR? But no matter now. He lived through the ordeal and came home, weakened but on the cusp of what would prove to be the best years of his life.

When he was discharged from the hospital, I withdrew Owen from school. I hired a small, diverse army of young caregivers, each working part-time, to give Owen experiences that he would not otherwise have. I was self-employed as a web developer and needed my daytime hours to make a living. So Owen’s caregivers would take him out every day, sometimes just to the local park, sometimes to lunch with a friend, to a movie, the museum, to go swimming. Most days, he spent more time with them than he did with me.

I chose to forgo my usual criteria for hiring caregivers. Instead, I hired based on personality, not credentials. I figured that the duties of caring for Owen were teachable skills. But decency, likeability, emotional intelligence—these were not. So I surrounded us with motivated, smart individuals who could just figure stuff out and enjoy life with Owen.

The drawback? Some of them had little to no emergency or even healthcare experience. I remember watching one of the caregivers pack up Owen’s bag for an afternoon outing and thinking, “What if Owen started to choke on the subway? What if she had to call an ambulance? Would she know what to do? What decisions would she make on his behalf? And could she live with her decisions afterwards?” I realized that I had handed over the care of my immensely vulnerable son to a group of young people who were, for the most part, unprepared to handle a crisis. It wasn’t fair. For anyone.

The decision wasn’t hard to make. I requested a standard DNR form from Owen’s primary physician. We went through it point-by-point, crossing off things that didn’t resonate and adding things that made more sense. Michael and I reviewed it together—calmly, intelligently, without the surrounding hysteria that accompanies decisions made under great stress and pressure. We settled on a final document that truly reflected our intentions for Owen, knowing we could amend it at any time.

The hard part was talking to the caregivers. One cried while reviewing it. Mostly they were sombre and serious. Possibly for the first time, Owen’s fragility was in clear focus and the worst-case-scenario was something real. But the relief everyone felt was palpable.

Owen didn’t give us a chance to implement the decisions reflected in the DNR, or to test our wills against the pre-made choices made in a different time and place. He died of his own accord, at his own time, leaving none of us with a harrowing memory of watching him die because of a form signed in the cold light of day.