I don’t remember much about what I was taught in school as a kid. But I do remember that all subjects had a subtle but effective message: it’s good to be Canadian. Families might vacation in Florida if they had money, or drive to Buffalo to take advantage of the exchange rate for back-to-school shopping–we liked the US for some things. But more or less we were taught that our land was cleaner, freer and healthier. I grew up understanding that not being American was a large part of Canadian identity. Which is extra funny in a way, because I was the only natural-born-Canadian in my all-American family. I am sure this status deeply informed my childhood pride and commitment to being Canadian. But still, I don’t think I was that unique in my viewpoint. We were taught that being Canadian was good, and better.

My partner Carsten is not from here. He was born in Germany and raised in southern Africa. Until he moved here, he was unaware of the subtle differences that distinguish Canadians from other North Americans (mostly identified by Canadians, not Americans, who really don’t think about this very much), and spent many years figuring it out. At this point, twelve or more years into his time in Canada, I think he has a clearer take on all of it than I do. 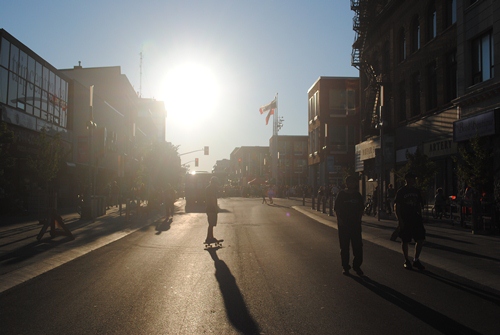 I attended a memorial event for Aunt Pat last week, given by the bereavement staff at Cambridge Memorial Hospital for patients who had died the previous year. (Cambridge is about 1 hour’s drive west of Toronto.) I accompanied my mom, who was keen to attend. On the surface they made a nice showing–various speakers, musical accompaniment, words of comfort. Most in attendance seemed to appreciate the efforts. Most in attendance might say it was a fitting tribute to their loved ones. 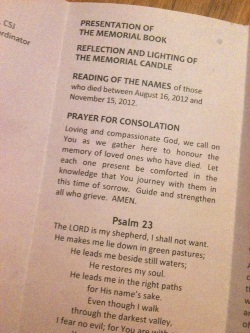 But I was uneasy pretty much from the moment I sat down. It started with the program, which was handed out at the beginning: hymns, Bible readings, call-and-response prayers. I looked around and noticed the Bibles on the front table. As I listened to the speakers I could hear muttered “Amens” behind me. The program mentioned a ‘Hindu Prayer for Comfort’, but it was introduced by the chaplain with, “Since this is a multifaith service we offer this poem…” There was a reading from the Bible that was prefaced and appended by the reader with a serious, dour stare at the audience and the verbal warning, “…God’s Word.” Finally, the Spiritual Care Coordinator concluded the proceedings by raising her hand over the audience with her eyes closed, delivering the final blessing from Jesus.

I was fine to stay and chat, even had a cookie or two. But inside, I was not happy. I had been duped into attending an evangelical church service, disguised as community bereavement counseling! And it was like no one noticed!

I caught up with Carsten at the end of the day when we’d both returned home. As I rattled off my litany of complaints, I watched his face intently, waiting for him to join me in my outrage.

He barely reacted, gave a half-shrug. “Of course,” he said. “You were in the Heartland.”