Owen would have been fifteen years old tomorrow, on August 18.

It’s a number I thought about a lot while he was still very young. I would think “I can’t imagine what he’ll be like at fifteen!”, or “He’s easy to carry now but just wait ’til he’s fifteen!” It’s a number wedged between states – older child and teenager. Maybe unimaginable even in regular circumstances. 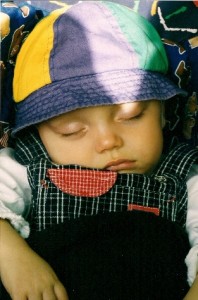 My outrage and disbelief about Owen at fifteen was highest when I thought about our sleep habits. Huddled together on the edge of my bed, one of us usually awake and irritated (hint: not him). I couldn’t move lest he wake up. Couldn’t move my arm, couldn’t cough, couldn’t air out. There was also the risk of disengaging his g-tube–I spent many nights stomping around, finding clean and dry sheets, cursing the slippery connections.

It had its charms, mind you. I loved his smell, the curls on the back of his head, his bony shoulder rising and falling with his wheezy breath, the way he would fall asleep once settled into his usual position.

Since his death I think about these precious things as I lay in bed. I imagine us curled up together, and I wish him good night.

Years ago, the very idea of our sleeping arrangement continuing on indefinitely was awful. Fifteen was the first age I would start to waver. Twelve? Sure. Thirteen? Not much different from twelve. Fourteen? Getting weird, but okay. Fifteen?! No, surely that’s the limit!

But, as with all things that are unimaginable from a certain place and time, I am sure I would have gotten used to it. Maybe, would even have been glad for it. 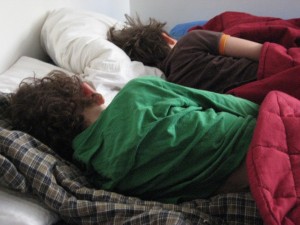 Tonight is the eve of the anniversary of his birth.  I can barely bring myself to think of this as a ‘birthday’, as in, cake and presents and Happy Birthday to you! No, this is not that.

But I will dream of him beside me, as I often do.