I have been working on a new video project that I will be launching soon, in which I interview people about their patient or caregiver experiences. I had the honour of meeting and recording two of my favourite people from the internet: Bill, and Claire.

First I want to tell you about Bill, and how our conversation is making me rethink everything. 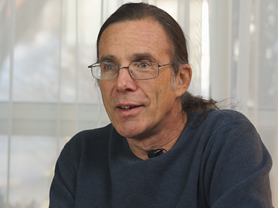 Bill Peace is an academic and an activist. He teaches anthropology at Syracuse University and blogs under the moniker ‘bad cripple’. He has been paralyzed since the age of 18. We spoke at length about all kinds of things: childhood, accessibility, parenting, advocacy. We also talked about loneliness, bias against disability, pain and suffering.

My conversation with Bill has stayed with me in a way nothing else has in a long time. I am haunted by our talk, actually. I thought I had everything figured out – that I knew what all the problems were. But after ruminating on Bill’s words for a while, I do not feel inclined to pat myself on the back as I sometimes do. Instead, I feel deeply uncomfortable.

Granted I am probably more sensitive to disability issues than people with no exposure to disability – but when you get right down to it, my experience of disability (in the public realm) is largely about inconvenience – like physical barriers to Owen’s wheelchair. I could still step around, open the gate, reason with the bus driver – I can’t think of a time we couldn’t participate in something because of access. Owen never slowed me down because *I* wasn’t disabled, only he was. I would just pick him up and carry him if needed. And Owen died as a child – through his lifetime, it was expected that I would advocate for him anyway.  Privately, disability was mostly about physical health and getting enough sleep.

While speaking with Bill, I became acutely aware that his experience in the world was entirely different than Owen’s. As we explored the ins and outs of access and equity and fairness, I recognized a missing link – he was shouting in the streets (mostly figuratively) and no one was listening.

I wondered out loud: Where are the ‘others’, the non-disabled, to join your voice? Why are you in this fight alone?

I was startled for a moment, but immediately knew he was right. Even as Owen’s best advocate, ally and protector, I only cared about my immediate circle. Getting what I want, for myself and Owen and the rest of the family, and not stopping to wonder about the other Owens who might have benefited from me challenging the rules instead of trying to bend them to suit my own needs. Like a young tree branch, rules just snap back into place even when you are strong enough to bend them. Those behind might or might not be able to get through the tangled path I so boldly rammed my way through.

I had thought of myself as a disability rights advocate, but I realize now I was simply advocating for my own good self. Bill and Claire (will post about our conversation next week) recognize the importance of being part of a movement, not just for themselves but for everyone else.

I am uncomfortable because now I’m aware of the necessity for activism and frankly, it sounds like unpleasant work.   (Stay tuned: Part 2 looks at the problems with pleasantness.)

A preview of things to come in my video project, this is one of four videos of Bill:

Bill Peace
00:00 explains how modern medicine has created a new class of disenfranchised people
02:29 describes how society has failed a generation of people and parents
04:54 recounts a story of an inaccessible school trip with his young son
06:53 discusses not feeling supported by the general public in terms of protecting or defending his rights
12:06 argues that people with disabilities need to be recognized as a minority group