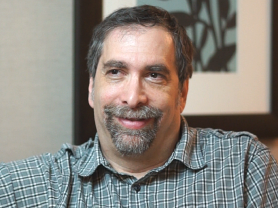 I met Single Dad (SD) a couple of weeks ago.  He’s the blogger behind the semi-eponymous Single Dad/Disabled Daughter. He was in town to visit a friend and agreed to be interviewed for my Conversation Library series.   SD has two adult children with severe disabilities – his daughter lives at home with him and his son, previously cared for by his ex-wife, now lives in a residential facility.

Our meandering conversation included so many things: what it’s like to feel excluded from family normalcy; trying to date as a single father to two children such as his; coping with the aftermath of an incident that violated his trust in his daughter’s safety at school; and trying to imagine his and his daughter’s future as he contemplates growing older.

What struck me most about SD was that he had no agenda – there was nothing in our interview to suggest he was selling a worldview or trying to convince anyone of anything. Certainly he gives opinions when asked but is mostly just focused on trying to do the right thing by his family, every day.

I made three videos of SD, one of which is included here. The rest are on his page at Conversation Library.

00:07 talks about being a single father and dating
05:45 discusses challenges of dating women who have children with disabilities
08:39 talks about challenges of maintaining male friendships
— there is a change in audio quality from this point on —
11:18 talks about being an anonymous blogger with a strong persona
13:42 discusses plans to become a special education advocate
15:51 shares his views on prenatal screening, abortion and anticipating raising a child with disabilities
26:55 answers the question, “Would you do it all again?”