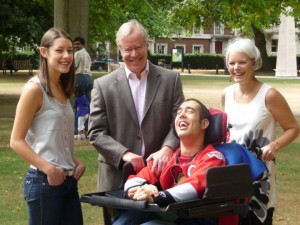 I interviewed Donna Thomson a few months ago when she was in town for her book launch. I had so much footage by the end it was hard to decide what to put in the videos! I decided in the end that almost all of it needed to be published.

I’m including one of the videos here, and you can see all three of Donna’s videos here. For me, this one was the most poignant. Donna and I seem to have reached the same conclusions about the role of the parent when raising a child with severe disability.

00:05 – Distinguishes between parenting and the role of the therapist
01:41 – Discusses types of therapy and her right as a parent to make decisions
02:46 – Shares an example of how invested she was in therapy
04:27 – Identifies the moment when she realized what her role should be
05:22 – Cautions against allowing the parenting role to be overtaken by therapy
09:37 – Shares a story about poor communication of medical information despite her extensive experience
12:52 – Encourages parents and professionals to establish boundaries and role definitions
16:31 – Discusses ‘age-appropriateness’ for both the child and the parents
20:22 – Shares her son’s adjustment to moving away from the family home