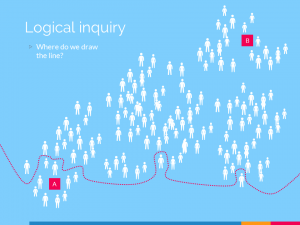 Where do we draw the line? A slide from my thesis presentation.

My thesis is done! I’m not going to post it anywhere until I’ve graduated in a few weeks, but in the meantime, here is a summary (which I adapted from the abstract).

Although physician-assisted suicide (PAS) is legal in several jurisdictions around the world, debate about its merits and implementation is far from settled. This debate has special, timely significance in Canada, as new PAS legislation is imminent. (Controversial recommendations from the Joint Special Committee on Physician-Assisted Dying include PAS for mature minors, PAS in advance directives, and PAS for people with mental illness.)

Slippery slope concerns are often at the centre of this debate—opponents worry that legalizing PAS in any form, however acceptable now, will inevitably lead to practices that are unacceptable. Concerns include risk of abuse and mistake, expansion of criteria, and an unobstructed path to euthanasia. Opponents also observe that those who support PAS on the basis of autonomy and suffering (common foundational arguments) are logically, on principle, committed to its expansion.

Two particular safeguards are then examined—determinations of capacity and suffering, respectively. Some questions addressed include:

In exploring answers to these questions, significant doubt is raised as to the extent to which these criteria function as safeguards against slippery slope concerns. Physicians are faced with the near-impossible task of assessing capacity and determining suffering without inserting their personal judgment of whether the person really ought to die, and in this way. In addition, they must do so without meaningful guidelines to assist in making these determinations with fairness and consistency. Other than in obvious cases of incapacity, why would a physician ever say no? More importantly, how could a physician ever say no without risk of accusation of inappropriately judging another’s suffering? Indeed, even if a physician denies a request a more agreeable physician may be found.

I conclude that, with the legalization of PAS in any form–particularly the form proposed in Canada –the promise of safeguards as protections proves illusory.

The thesis was submitted in partial fulfillment of the Master of Science degree requirements at The Bioethics Program, Union Graduate College/Icahn School of Medicine at Mount Sinai. Supervised by Bonnie Steinbock, Professor of Philosophy at University of Albany.