Apologies to my bioethics and patient engagement friends: I have something to say about dieting and need to put it somewhere! 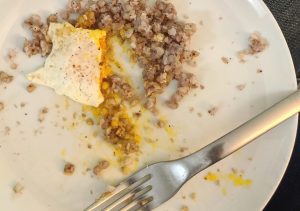 I’ve been in the process of sorting out my weight and health for about 2 years now. Most readers know the story: I lost 45+ pounds and I’m not even pre-diabetic now, nevermind having been diagnosed with type-2 diabetes. And I recently discovered another good side effect: previously chronically high thyroid readings are now normal. So, lots of changes. I trucked along happily while I was losing weight and improving my diet, but I hadn’t thought much about what would happen when I reached my goal weight. When it happened, I had a crisis of “now what?” Couldn’t return to old habits… but I didn’t want to keep losing weight. So I slowly started adding calories until I stopped losing, and landed at a place where I *thought* I understood what I needed to eat to maintain my weight. Makes sense, right? And conventional wisdom says: if I eat more, I’ll gain weight. If I eat less, I’ll lose weight. So until recently I’d been rigorously adhering to a golden number.

In a surprising turn of events, I’m learning that bodies are far more complex than that.

I’m writing this for all you folks out there eating at a caloric rate that feels ungenerous or that’s compromising your energy. Where you’ve ratcheted down your food so much there’s nowhere to go, even if you still want to lose a few pounds and can’t afford to eat less. You can read more about what I’m about to say if you look up ‘reverse dieting.’ I didn’t investigate this as I was losing weight and I really wish I had. Not too late though.

I was over 175 pounds and eating around 2400 calories a day. In order to lose 2 pounds a week, I had to eat around 1000 calories a day less. Simple math. I did this for several months. When I hit my goal of 130 pounds, I started adding calories back and also started to shift my exercising from a lot of cardio to more focused resistance training. I settled in at around 1800 calories a day for maintenance and assumed this was my forever calorie amount unless I wanted to exercise more. I looked back at 2400 calories and thought, well no wonder I was overweight!

But as it turns out… while calorie in/calorie out is the right principle, it’s also possible to find equilibrium at different levels of intake. I’ve slowly been increasing calories again and haven’t gained any weight. I’m now eating 2350 a day – almost the same amount as when I thought I was overeating at 175 pounds. And I’m still 130 pounds.

There are a few factors causing this, having to do with body composition and metabolic rate. I burn more calories now just walking around than I did before, because I’m carrying more muscle and sending frequent muscle-building signals through more consistent training. But this is a relatively new state for me. I did a LOT of cardio while I was losing weight. More cardio means more efficiency and energy conservation – your body requires less fuel because you’re sending signals that it needs to be efficient. Anything beyond that gets stored as body fat. So if you want to eat more, cardio does not support this. This is why, in order to keep losing weight despite all the cardio exercise, people have to keep reducing calories until it’s untenable. Building muscle, on the other hand, is considered an ‘expensive’ activity. Carrying muscle is inefficient use of energy. You have to eat more to build and maintain it.

Also – and this is the crucial point – at 1800 calories, I was still under-powered. Yes, I was burning all the calories I was eating and therefore maintaining my weight – but this created a false assumption it was the ‘correct’ amount. I was slowly eating more until I stopped losing weight, and I assumed that that meant it was the right place to stop increasing calories.

That’s certainly one way to do it – but it seems I stopped increasing when I found the bottom end of a range. I’m now trying to find the upper end – see how much I can eat and still maintain my weight.

All of this to say: if you’re a dieter (which is shorthand for a lot of things, but maybe you identify) and have been eating at a certain low calorie range for a long time – well, it may be unnecessarily low. You may have artificially created a balance that seems like your ‘true’ maintenance – but it’s possible you could also maintain at a higher calorie level – and probably feel better overall. Since eating more: workouts are better, sleep is deeper and longer, libido is increased, I no longer get dizzy when I stand up too fast, I’m not chilly all the time, mood is steadier.  And something to consider: if you get most of your exercise through cardio, you might research how this is affecting both your metabolism and cortisol production (stress response), both of which will impact a lot of things including how you lose or maintain weight.

Not medical advice. Just, you know… think it over.

If you’re curious: for food coaching, I’ve been using this app and it’s done wonders for helping me slowly increase calories without freaking me out. For exercise, I’m currently following this program. And I also walk an average of 8k steps a day, which I track with a FitBit.